I recently signed up for Food & Wine Magazine’s Daily email where I get one sensational (their words not mine) recipe emailed to me every day. I usually glance at the recipe and then delete the email, not because the dish sounds bad, but because I know I will never make it. A week or two ago I got one recipe that I knew I wanted to try… A Sweet Corn Panna Cotta with Fresh Blueberry Compote. I had panna cotta for dessert at a restaurant a few years ago and instantly loved it; granted that one was a Mango Panna Cotta with a Passion Fruit Sauce. I never attempted to make it myself because I thought that it would be difficult – the one recipe I came across was a bit intimidating but once I saw this one I knew I could handle it. 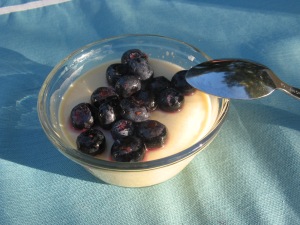 I began my shucking two ears of corn and then used a corn zipper to remove the kernels and boiled them for about 15 minutes until they were tender. 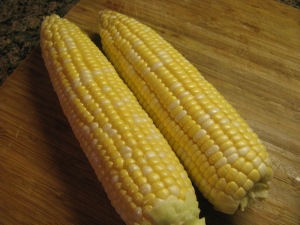 Following that I rinsed the kernels in cold water and then transferred them into the bowl of my food processor. 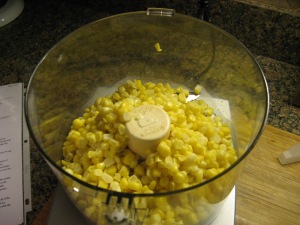 Meanwhile I sprinkled 1 1/2 teaspoons of unflavored gelatin powder over 1/4 cup of whole milk, which I let stand for 5 minutes. 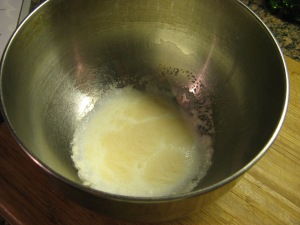 In a small saucepan I combined whole milk, heavy cream, salt, granulated sugar, and dark brown sugar and brought it to a simmer over medium heat whisking it to dissolve the sugars. 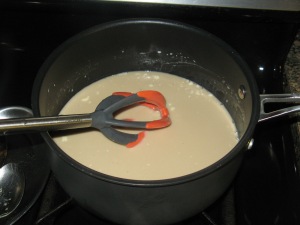 I then poured the hot milk mixture into the bowl with the gelatin mixture and stirred it until the gelatin dissolved. 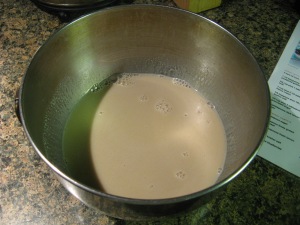 I then poured the mixture over the corn in the food processor. 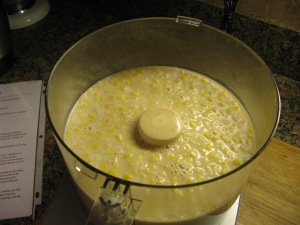 I pureed the corn and milk mixture until it was smooth and then strained it through a sieve pressing on the solids to get all of the liquid out and then discarded the solids. 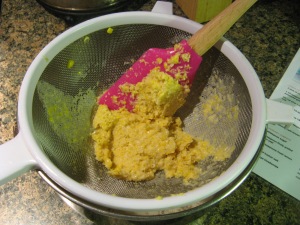 I strained the mixture once again through the sieve and then placed the bowl in an ice bath until it was cool, stirring it occasionally. 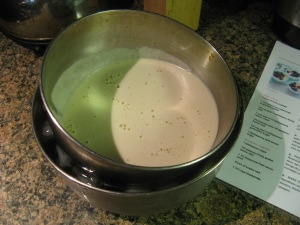 And finally I divided the mixture into four 8-ounce ramekins, covered them and placed them in the refrigerator overnight so they could set. In all honesty, I had my doubts that I made the panna cotta correctly because it was so watery when I poured it into the ramekins. I checked one of them an hour or so after refrigerating it to make sure it was solidifying and I am happy to say I had made them correctly! 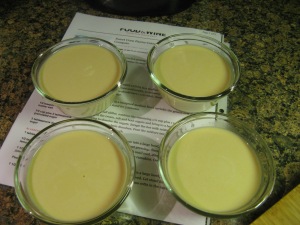 While the panna cotta was “baking” in the fridge I made the Blueberry Compote which couldn’t have been simpler. I combined blueberries with sugar, lemon zest, lemon juice and kosher salt and mixed it until the sugar was dissolved and then let it stand for a bit (at least 30 minutes), stirring it occasionally. 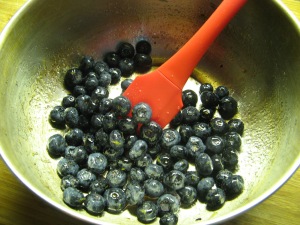 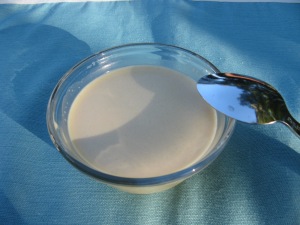 And topped with the Blueberry Compote. 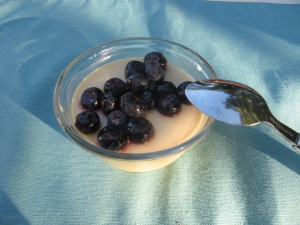 This was absolutely delicious! The panna cotta was the perfect texture, silky and smooth, and the corn flavor was just perfect without being too sweet or having too much of a “vegetable” taste, for those of you who aren’t keen on eating your veggies. 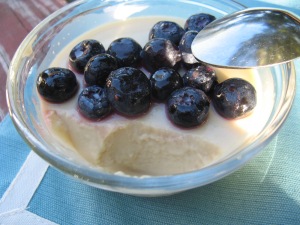 1. Make the Panna Cotta: In a medium pot fitted with a steamer basket, steam the corn until tender, 15 minutes. Let cool, then cut the kernels from the cobs (you should have 1 1/2 cups); discard the cobs. Transfer the kernels to a blender.*

2. Meanwhile, in a heatproof medium bowl, sprinkle the gelatin over 1/4 cup of the milk. Let stand for 5 minutes.

3. In a small skillet, combine the remaining 1/2 cup plus 1 tablespoon of milk with the cream, salt and both sugars and bring to a bare simmer, whisking to dissolve the sugars. Scrape the hot milk into the gelatin and stir until the gelatin dissolves. Pour the mixture into the blender over the corn and puree until smooth.

4. Strain the puree through a sieve into a large bowl, pressing on the solids; discard the solids. Strain again without pressing; discard any solids in the sieve. Set the panna cotta in an ice bath until cool, stirring occasionally. Scrape the panna cotta into four 8-ounce ramekins. Cover and refrigerate overnight until firm.

5. Make the Blueberry Compote: In a large bowl, combine all of the ingredients and mix until the sugar is dissolved. Let stand for at least 30 minutes, stirring occasionally. Serve the panna cotta in the ramekins with the compote.

*I opted to remove the kernels from the cobs beforehand and boiled the corn for about 15 minutes and then drained it while running them under cold water to cool them. And instead of using a blender, I used a food processor.

Many people don’t think of summer as the time to eat soup, but, some of the best soups can be made during the warmer months. Especially with the bounty of vegetables that are in-season. Just think of the amazing soups that can be made with watermelon, tomatoes and corn – all three of which have their peak season during the summer. A few years ago I made a Corn Chowder after attending a culinary event at a local Williams-Sonoma and I saw a Corn Zipper used and knew I had to have one. Well, that Corn Zipper has been sitting in a utensil drawer ever since then until last week when thinking of what to make for dinner I saw it and instantly knew what I wanted to make… Chicken Corn Chowder. Just in case you are wondering, a Corn Zipper is exactly what it sounds like, a tool that allows you to zip corn kernels right off of the cob. It’s much easier and safer than using a knife! As luck – or not so lucky depending on how you look at it – would have it I ended up making this chowder on a rainy day last week that resulted in some heavy flooding in my area so I was essentially rained-in. Hence, I took advantage of the day and also made a pesto sauce and a Meyer Lemon Yogurt Cake which I will be posting about within the next day or two.

Along with corn, the other vegetables I added to the chowder were celery, carrots, onion and potatoes. 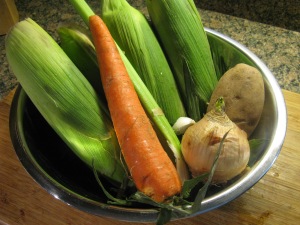 My lovely corn once it was shucked. I lucked out with picking perfect corn just by touch because it was way too crowded in the corn area of my supermarket to shuck it there. 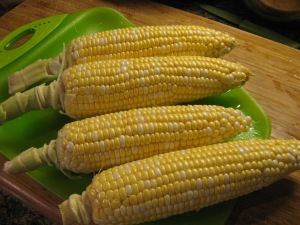 Here are the chicken and vegetables prepped and ready to go. I poached the chicken thighs in chicken stock along with salt, pepper and some spices (onion powder, garlic powder and oregano) for about 40 minutes. More than likely I cooked it longer than need be but since it was in liquid it didn’t dry out or anything. I diced up the celery, a carrot and the onion and mixed it together along with a minced garlic clove. And finally I cut two potatoes leaving them in large chunks so they wouldn’t break down while cooking.

Using a large Dutch oven I began by sautéing the onion, carrot, celery and garlic in melted butter for two minutes – this is more or less a mirepoix. A true mirepoix calls for two parts onion and one part each of carrot and celery. 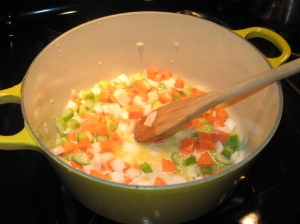 I then added in a 1/2 cup of flour and stirred the mixture to make a roux. Once the roux had browned I set it aside and let it cool to room temperature. 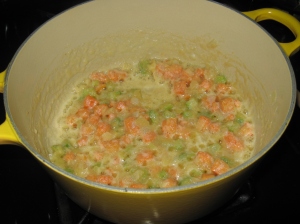 While the roux was cooling I combined the corn, potatoes and 3 cups of chicken stock in a pot and brought it to a boil and then let it simmer for about 15 minutes. My gauge for the cooking time was the tenderness of the potatoes. I didn’t want them to be completely cooked through, but, I wanted them pretty close to being done. I then added the chicken stock mixture to the roux – a little at a time – whisking it briskly so it wouldn’t get lumpy and then returned it to the heat and brought it to a boil. 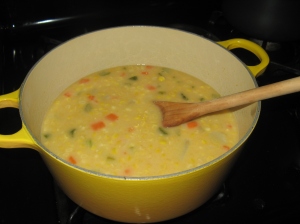 Once the chowder came together – it was thick – I then heated 2 cups of half-and-half in a small saucepan and added it along with the chicken to the chowder and some salt, pepper and a pinch of nutmeg. I let it simmer for about another 15-20 minutes so the chicken could heat through and the potatoes could finish cooking. This chowder was absolutely delicious and even better the next day. 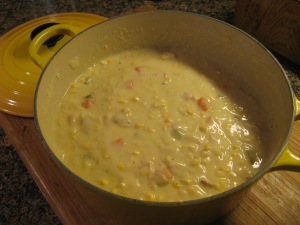 2 cups cooked chicken, cut into pieces (I poached two chicken thighs, but you could easily use a store bought cooked rotisserie chicken)

Salt and pepper to taste

1. If you are choosing to cook your own chicken, prepare it whichever way you like. You could use leftovers or as I did simply poach the chicken with chicken stock and spices.

2. Melt the butter in a large Dutch oven (or a large pot) over medium heat. Add the onions, carrot, celery and garlic and sauté for 2 minutes. Add the flour and stir to make a roux. Cook until the roux I lightly browned and then set aside to cool to room temperature.

3. In another pot combine the corn, potatoes and chicken stock and bring to a boil and then simmer for 10 minutes. Add this to the roux slowly, whisking it so it doesn’t lump. Return the pot to the heat and bring it to a boil. The mixture should become very thick.

4. In a small saucepan, gently heat the half-and-half; stir it into the chowder along with the cooked chicken. Add the nutmeg and the salt and pepper to taste. Reduce the heat so the chowder can simmer and so the potatoes can finish cooking and the chicken can heat through.