With berries in season there’s so many delicious treats you can make with them… Pies, Cakes, Muffins and probably something that doesn’t come as quickly to mind… ice cream! Ever since I got my ice cream maker a few years ago I am always trying to come up different flavors to make – Pumpkin, Lavender Vanilla, Mint Chocolate Chip – some common and some not so common. I’ve even made Hibiscus Sorbet. So, with a fridge full of blueberries I decided to make a vanilla ice cream base and then swirl in a blueberry compote, hence Blueberry Vanilla Ice Cream.

To make the vanilla ice cream base I combined milk, sugar and salt in a medium bowl and blended it with a hand mixer on low speed until the sugar was dissolved. I then stirred in heavy cream and vanilla bean paste (you could use vanilla extract.) I covered the bowl and refrigerated it for about 5 hours (you could do as little as 1 to 2 hours, you just want to make sure that the mixture is cold.)

Meanwhile, to make the blueberry compote, I combined blueberries, sugar and lemon juice in a small saucepan over medium-low heat and let the mixture simmer until some of the blueberries burst and the mixture began to thicken. I removed it from the heat to let it cool and then covered it and refrigerated it as well. 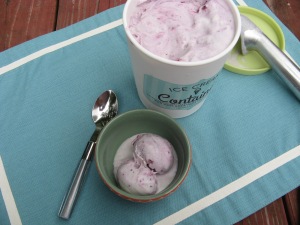 And then it was time to enjoy… And one simple sentence sums up the flavor…. There’s nothing like homemade!

But, if you don’t have an ice cream maker here are two quick ideas on how to make your own Blueberry Vanilla Ice Cream. Use the compote as a topping on your favorite vanilla ice cream. Or take it one step further and soften a pint of your favorite vanilla ice cream and then add it to a large bowl and using a rubber spatula fold the compote into the ice cream. Place the ice cream in a freezer-proof container and place it back in the freezer so it can firm up, about 1-2 hours.

For the vanilla ice cream

For the blueberry compote

For the vanilla ice cream; In a medium bowl, use a hand mixer on low speed (or by hand use a whisk) to combine the milk, granulated sugar and salt until the sugar dissolves. Stir in the heavy cream and vanilla extract. Cover the bowl and refrigerate for 1 to 2 hours, or overnight.

For the blueberry compote; In a small saucepan combine the blueberries, sugar and lemon juice and simmer over medium-low heat until the blueberries begin to burst and the sauce thickens. Let cool, cover and refrigerate.

Transfer the ice cream to a freezer-proof container and freeze for about 1 to 2 hours to firm.