It’s officially the first day of summer (YAY!) After the epic snow fall from the past winter the warmer days ahead are definitely being welcomed with open arms – although, I could do without the humidity that those days also bring. By far my favorite seasons are spring and fall. But, I digress. I think one treat that most of us can agree on that is a summer staple is ice cream – I particularly can eat it in the dead of winter with no problem though. Hence, me wasting no time in churning out a few batches of ice cream back in January soon after getting my Cuisinart Ice Cream Maker.

A week or so ago while I was doing something on my computer, maybe working on a blog post, I came up with the idea of Lavender Vanilla Ice Cream. I have plenty of dried lavender left over after making Lavender Cupcakes back in April, which is sitting in a container on my counter right in my field of vision while I am cooking so it’s no wonder that it has been on my mind. You always see lavender and vanilla combined in all sorts of home items so I figured that melding the two flavors together in ice cream should be a winner – and fortunately I was right!

To create the ice cream I followed a recipe for Simple Vanilla Ice Cream with one simple modification. I soaked three tablespoons of dried lavender in the one cup of milk the recipe called for for about six hours – this is exactly what I did to get the lavender flavor for the cupcakes. Following that I strained the milk using a fine mesh sieve and then continued with the recipe. Combining the milk with sugar, salt, heavy cream and vanilla paste (I substituted this for vanilla extract to get that authentic vanilla bean flavor along with the black specks of ground vanilla beans.) I refrigerated the mixture overnight and I poured the mixture into the ice cream maker and let it do all the work. And about 20 minutes later it was done! 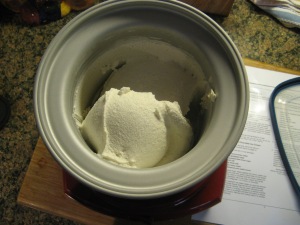 I wanted the ice cream to have a firmer consistency so I transferred it to this nifty ice cream container that I recently picked up at my local Home Goods and placed it in the freezer for about another hour or so. Of course I did a quick taste test before freezing it and was very happy with the results. 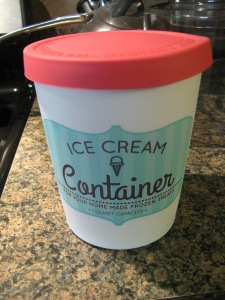 After sitting in the freezer for a bit I was finally able to enjoy a nice bowl of my Lavender Vanilla Ice Cream!

A pinch of salt

1. In a medium bowl, use a hand mixer on low speed or whisk to combine the milk, sugar and salt until the sugar is dissolved. Stir in the heavy cream and vanilla. Cover and refrigerate 1 to 2 hours, or overnight.

2. Turn on the Cuisinart ice cream maker; pour the mixture into the frozen freezer bowl and let mix until thickened, about 15 to 20 minutes. The ice cream will have a soft creamy texture. If a firmer consistency is desired, transfer the ice cream to an airtight container and place in freezer for about 2 hours. Remove from freezer for about 15 minutes before serving.

Soak 3 tablespoons of dried lavender in the milk for 6 to 8 hours in the refrigerator. Following that strain the milk through a fine mesh sieve and continue with the recipe substituting vanilla bean paste for the vanilla extract.