As I mentioned in a previous post I was rained-in last week and went on a bit of a cooking binge making a Chicken Corn Chowder, a Meyer Lemon Yogurt Cake and a Pesto Sauce; the latter of which I finally put to good use and made Pesto Chicken Packets – a recipe I came across in an issue of Rachael Ray Magazine a few years back. Let me take a few steps back though and go over how I made the Pesto Sauce.

To make the sauce I combined 3 cups of basil, 1/4 cup of pine nuts, a garlic clove, 1/2 teaspoon kosher salt, and 1/4 teaspoon of black pepper in the bowl of a food processor. 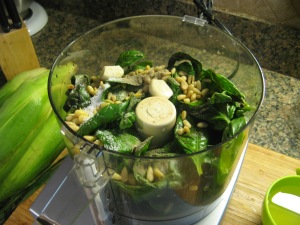 I pulsed the ingredients until they were combined.

And then let the machine run while I drizzled 2/3 cup of olive oil into the mixture. 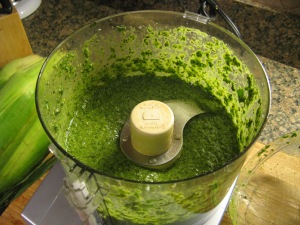 After transferring the mixture to a bowl I stirred in a 1/4 cup of freshly grated of Parmesan cheese.

Since I wasn’t using the Pesto Sauce immediately I stored it in an airtight container in my refrigerator. After being in the fridge for a few days I added a little more olive oil to the top of it to make sure it would stay fresh. And when I was ready to use it was perfect. 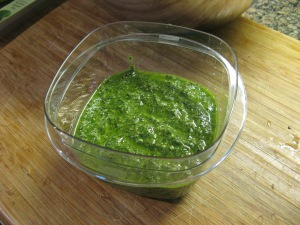 On to the Pesto Chicken Packets…

Along with the chicken and pesto, I also needed zucchini, plum tomatoes and scallions for the recipe. 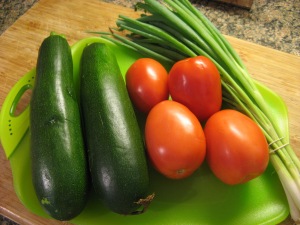 I prepped the vegetables by slicing the zucchini, chopping the tomatoes and trimming the scallions. 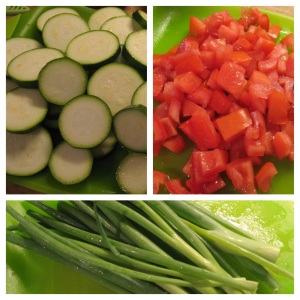 Then it was time to prep the chicken packets for the oven. I drizzled about a teaspoon of olive oil in the center of a 12-inch long sheet of aluminum foil and placed a thin-sliced chicken breast seasoned with salt and pepper on top of it. I then spread about a tablespoon of the pesto over the chicken. 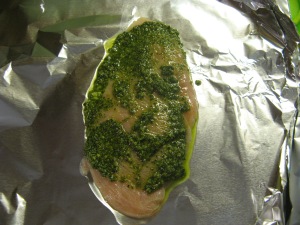 Next it was time to cover the chicken with about a handful of the sliced zucchini and chopped tomatoes and a few of the scallions. Prior to closing the packets I also dolloped about two tablespoons of the pesto on top. 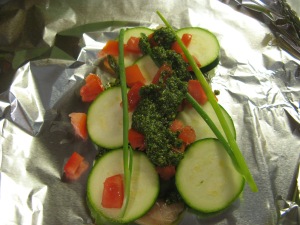 I placed all of the packets on a baking sheet and baked them in a 355 F preheated oven for 40 minutes.

And voila, they were perfectly cooked in that time. This is definitely a great recipe for chicken as the juices of the zucchini, tomatoes and of course the pesto produces a chicken breast that is perfectly juicy and flavorful. I served them with brown rice and no worries I did take the chicken along with all of its components out the aluminum packet prior to eating it. How else was I going to be able to mix all the wonderful juices in with my rice?

1. Place the basil, pine nuts, basil, salt and pepper in the bowl of a food processor and pulse to combine.

2. While the machine is running drizzle the olive oil through the feed tube, stopping occasionally to scrape down the sides.

3. Transfer to a bowl and stir in the Parmesan cheese.

1. Preheat the oven to 355 F. Cut five 12-inch long sheets of heavy-duty foil. Drizzle 1 teaspoon olive oil in the center of each sheet.

2. Season the chicken with salt and pepper. Lay 1 piece of chicken in the center of each sheet and spread 1 tablespoon pesto on top.

3. Mound a handful of the zucchini and tomatoes over each chicken breast along with two pieces of scallion. Dollop a few tablespoons pesto over each mound. Fold the foil over the chicken and vegetables; pinch the edges to seal.

4. Place the packets on a baking sheet and bake for 40 minutes.