Short-cuts aren’t always a bad thing. When you are driving they can get you where you have to go quicker and hopefully help you avoid some traffic along the way. In our day-to-day lives they can make us a bit more efficient to get daily tasks completed. And in baking they can guarantee us a flakier crust and fruit that’s perfectly ripe for a pie!

A few weeks ago I got it in my head that I wanted to make a peach pie. I’m actually not a big fruit pie fan – I’m not that keen on fruit pie filling, especially when it’s on the runny side – but, I think the Pillsbury Pie Crust sitting in my refrigerator got me thinking. I’ve made pie crusts from scratch once or twice before but, like I said there’s nothing wrong with taking a short-cut every now and then. I went one step further with my short-cut and opted to use frozen peaches. I just wasn’t in the mood to peel and slice a few pounds of peaches.

I combined 2 pounds of frozen sliced peaches with sugar, flour, lemon juice, cinnamon, allspice and almond extract. I decided on the almond extract after reading that many bakers used to add the nut – sometimes called a “bitter almond” –  that’s inside the pit of the peach to the pie while baking to give it an almond flavor. That practice has since diminished as it was discovered that the nut contains trace amounts of cyanide, granted you would have to eat a large quantity of them for anything to happen, but, who wants to bite down on something hard when they are enjoying a piece of pie.

Next I unrolled one of the pie crusts and pressed it into the bottom of the pie dish.

I then added the filling and mounded it slightly in the middle and dotted it with small pieces of unsalted butter.

Instead of just unrolling the other pie crust on top of the pie I decided to give it a little pizazz with a lattice pattern that wouldn’t require weaving. First I sliced the top pie crust into 6 1-inch strips… 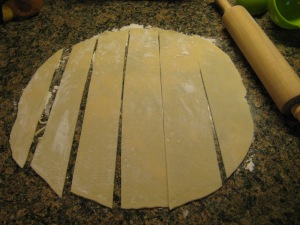 And then divided those strips in half to end up with a total of 12 1/2-inch strips. 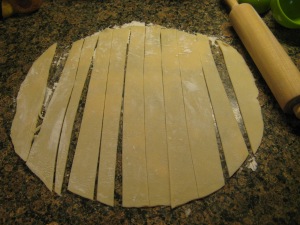 I laid five strips across the pie, doing my best to equally space them 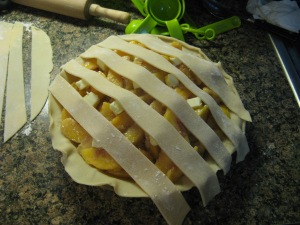 Then I laid four strips across the previous strips diagonally.

And after some trimming and crimping, voila, a simple lattice pattern. 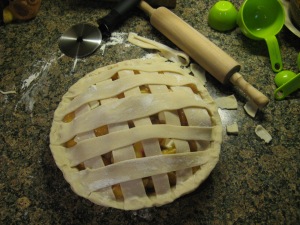 I then placed the pie on a baking sheet in a 400 F preheated oven for about 25 minutes. I then lowered the oven to 375 F and baked the pie for about another hour. Prior to lowering the temperature I brushed the top of the pie with an egg wash to ensure a nice golden brown color. I kept a close eye on the pie and when I noticed the rims of it were browning a tad bit too much I covered it with aluminum foil. I knew it was time to take the pie out of the oven when the filling was bubbling.

After letting it cool it was time to slice into it… 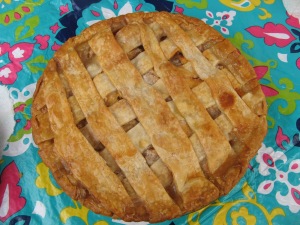 And I happy to say that the pie was a perfect consistency… Not too watery and not too dry! It was a definite winner! 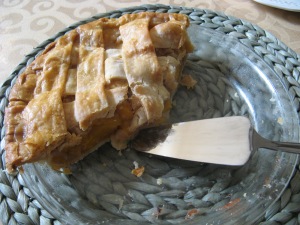 2 pounds of sliced and peeled frozen peaches (Use frozen, do not thaw)

2. Make the filling by mixing the peaches in a large bowl with the sugar, flour, lemon juice, cinnamon, all spice and almond extract.

3. Unroll one pie crust and place in an ungreased 9-inch pie plate. Add the filling, mounding it slightly in the center and dot with the butter.

4. Unroll the second crust and dust it lightly with flour and cut it into 1/2-inch wide strips. Lay half of the strips on the pie in one direction, leaving about a 1-inch space between each strip. Lay the remaining strips on top, crossing them diagonally to make a faux lattice pattern. Trim the edges of the strips leaving a small overhang and crimp the edges into the bottom crust with your fingers.

5. Place the pie on a baking sheet and place it in the oven for 20 minutes. Lower the temperature of the oven to 375 F and brush the pie with an egg wash (beat the egg with a tablespoon of water). Bake for another hour until the filling it bubbly. If you notice the out crusts of the pie is browning too quickly cover it loosely with aluminum foil. Once baked, transfer to a rack to cool completely before slicing. Store remaining pie in the refrigerator.