While I enjoy decorating cakes one thing I rarely do is decorate cookies. Around the holidays I always have this grand idea of making sugar cookies and decorating them with royal icing. I actually have a mitten shaped cookie cutter that I have been meaning to use for the past two Christmases to make decorated cookies and it just hasn’t happened. Part of the reason is that I run out of time and the other part is that I am not fond of royal icing. I think it goes back to when I was taking Wilton decorator classes and one of the courses involved making flowers with royal icing. While I liked that the flowers would harden because of the royal icing, which meant you could make them ahead of time to decorate with them later, I just didn’t like the way my flowers looked. And I found working with the royal icing to be a bit of a headache. You have to keep it covered so it doesn’t harden and so forth. Because of all these little things I just avoid it. It’s actually been years since I’ve made royal icing, but, I decided that this year I wanted to make Valentine’s Day cookies that were decorated not just with sprinkles. 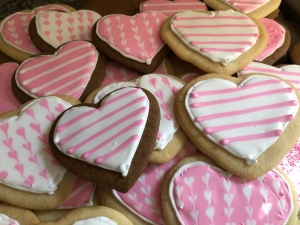 I began by making sugar cookies (I also made a batch of Gingerbread Cookies that you can see in the pics as well). I actually took a major shortcut in making the cookies. I purchased Pillsbury’s Sugar Cookie Dough, the one that comes in a roll not the pre-cut ones, and per the instructions on the wrapper I kneaded in flour before rolling the dough out on a floured surface. I then used a heart-shaped cookie cutter to cut out the cookies. I placed them on a parchment-lined cookie sheet and placed them in the refrigerator for a few minutes before baking them. I was hoping that chilling the cookies for a few minutes would help the cookies keep their shape while baking – cold cookies don’t spread as much while baking. Unfortunately this wasn’t the case. Some of my hearts ended up looking like circles or wonky shaped hearts. The two arches at the top weren’t as noticeable as I hoped they would be. I just figured I would make them look like hearts by decorating them. I ended up reading some reviews about the cookie dough and quite a few of them were negative and expressed what I had experienced. The dough spread way too much while baking. Oh well, I know for next time.

While the cookies were cooling I made a batch of royal icing. I removed about 1/2 cup of the icing and transferred it to a piping bag fitted with a small round tip. I then added in 2 tablespoons more water to the remaining icing to thin it to a syrup consistency. I then removed half of it and transferred it to another piping bag fitted with a small round tip and tinted the remaining icing a light pink and then transferred it to another bag, with, you guessed it, another small round tip. I used the thicker consistency icing to pipe the outline of the hearts on each cookie. After letting that set for a few minutes I then used the thinner consistency to flood the cookies. I didn’t go too crazy with my decorating. I piped horizontal lines in the contrasting color on some of the cookies and made a heart design in other. For both, I piped the secondary color on the icing while the first one was still wet this way the icing would dry together and be smooth. To create the heart designs I piped dots onto the cookies and then used a toothpick to drag a vertical line down the center of the dots. If you want to create a 3-D design on your cookies wait until the flooded icing dries and then pipe whatever design you would like onto the cookies. 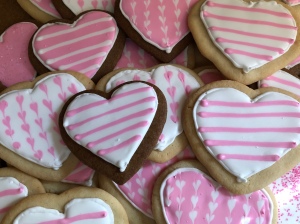 I must say, decorating these cookies with royal icing was a lot easier than I remember it being. Or it could be that I find it easier compared to some of the cake decorating I do. I remember when I first started baking making some things seemed so daunting. Just last week I was working on a cake. I had just finished filling and crumb coating it and was about to make another batch of frosting to decorate it when I realized I had a major fail so I had to toss the cake and start over. I was able to bake and decorate another 3-layer 9-inch cake in just a few short hours. Thankfully I didn’t freak out and was able to manage my time to get it done. Had this been a few years ago I wouldn’t have been so calm.

So, will I attempt to make cookies decorated with royal icing again? Absolutely! Although next time I will be making the sugar cookies from scratch or possibly using a store-bought mix I only have to add a few ingredients to in hopes that they will keep their shape better. My gingerbread ones baked up perfectly, but, I also had made the dough a few weeks back and then rolled, cut and froze them until I was ready to bake them. 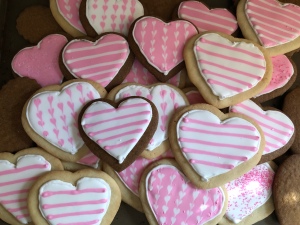