There is nothing like home-grown fruits and vegetables! When I was younger we used to always grow cucumbers, eggplant, lettuce, string beans, strawberries (the only fruit with its seeds on the outside) and my favorite, tomatoes. I remember picking the tomatoes, rinsing them and biting into them like they were an apple. Unfortunately store bought tomatoes don’t invoke that same zeal in me. I strictly use those for sandwiches and salads. But, there is one store-bought tomato that does come close to that memory of my childhood… Heirloom Tomatoes. You may or may not have seen them at your local supermarket. They are usually not the perfect round tomatoes that many of us have come accustomed to seeing and they come in an array of colors – red, orange, yellow, green and purple. Recently I came across a torte recipe – Tomato-Fontina Torte with Rosemary Crust – incorporating these tomatoes and I knew I had to try it. It took visiting a few different supermarkets, but, I finally found decent heirloom tomatoes to use.

I started the torte by making the crust… I combined flour, sugar, fresh rosemary, salt and pepper in the bowl of my food processor.

After I pulsed it until it was just combined I added in 12 tablespoons of cold butter cut into small pieces and pulsed the mixture until it looked like coarse meal.

I then added in eggs while the food processor was running so the dough could come together.

After kneading the dough on a lightly floured surface I pressed it into the bottom and halfway up the sides of a 9-inch springform pan. I then covered it and refrigerated it overnight. 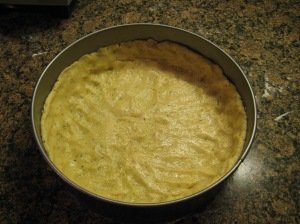 The following day, while the crust was still in the refrigerator, I prepped the heirloom tomatoes by slicing them, spreading them on baking sheets and sprinkling them with kosher salt so they could release some of their juices. 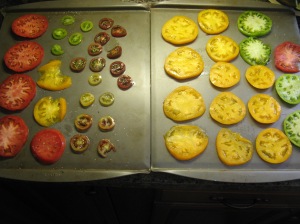 I also got my other ingredients together… shredded fontina and parmesan cheeses and capocollo.

I combined the 3 cups of shredded fontina with 7 tablespoons (1/2 cup minus 1 tablespoon) of shredded parmesan along with a teaspoon of fresh chopped rosemary.

As you can see my tomatoes did a great job of releasing their juices. I should note that I did let them sit for about an hour as opposed to the recipe recommended 30 minutes. 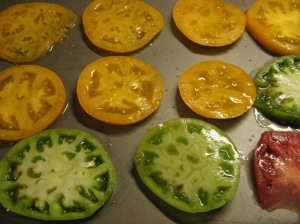 After patting them dry it was time to start assembling the torte. I finally took the very cold crust of out the refrigerator and sprinkled it with a tablespoon of panko breadcrumbs.

On top of the capocollo I scattered half of the cheese mixture.

I repeated the layering once again.

And finally I used up the rest of my tomatoes for the very top layer and then sprinkled it with a tablespoon of shredded parmesan cheese. 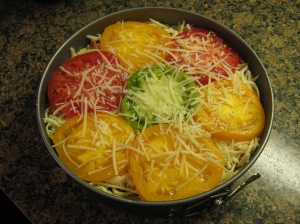 I placed the torte on a baking sheet and baked it in a 375 F preheated oven for 40 minutes. I wanted to be sure that the crust was completely cooked through so I dropped the temperature of the oven to 350 F and baked the torte for another 7 minutes. While the recipe did call for 35 minutes in a 400 F preheated oven I didn’t want to run the risk of over-cooking the torte at such a high temperature. And I am happy to say that my temperature and time adjustment was just perfect…

I let the torte cool for about an hour before removing the ring from the springform pan.

This was absolutely delicious and I can’t wait to make it again! There’s isn’t one flavor that overpowers the torte… In every bite you get a hint of the rosemary, the tomatoes, capocollo and best of all the cheese. 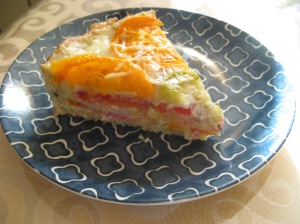 2. Whisk the eggs and egg yolk in a small bowl. With the motor running, add the eggs to the food processor and process until the dough just gathers into a ball. Turn out onto a lightly floured surface and gently knead until soft and pliable. Press the dough into the bottom and about halfway up the side of a 9-inch springform pan. Cover and refrigerate the crust until very cold, at least 1 hour or overnight.

3. Slice the tomatoes and spread them out on 2 baking sheets in a single layer. Sprinkle lightly with salt and set aside until they release some of their juices, about 30 minutes. Meanwhile, combine the fontina and all but 1 tablespoon of the pecorino (parmesan) in a bowl; add the remaining 1 teaspoon rosemary.

5. Transfer the pan to a baking sheet and bake until the crust is golden and the cheese is melted, about 35 minutes. Transfer to a rack and let cool about 1 hour, then remove the springform ring.