A few months ago I came across a recipe for a Marbled Nutella Banana Bread on a fellow bloggers’, My Ninja Naan, blog  and I have wanted to make it ever since. I was all set to make it last weekend but then my dad ate one of my perfectly ripened bananas. It was probably for the best though, the bananas were practically over-ripened in my book so I am sure the taste of the bread would have been overpowered by the banana taste and the Nutella flavor would have gotten lost in it. While I am a fan of bananas I prefer to eat mine when they are pale yellow without any spots – when most people would say they are not ready to be eaten – so they won’t have the overpowering banana taste I am not fond of. So, I bought three bananas that were on the verge of turning a darker shade of yellow and let them sit for a week to ripen up a bit to make the bread.

I started off by sifting together flour, baking powder, baking soda and salt. While I do have a traditional sifter, I prefer to use a sieve to sift my dry ingredients as it’s much quicker and I find that it does the job just as well. 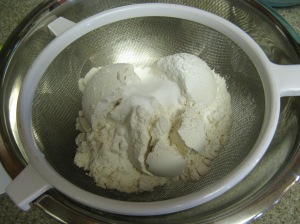 I set the dry ingredients aside and I began to mix together the wet ingredients. First up, I mashed three ripe bananas. 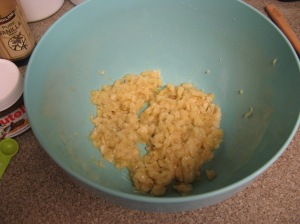 Next, I added in the butter, granulated sugar, brown sugar and vanilla extract and used my hand mixer to combine them all.

I then mixed in two eggs.

And finally I added in the flour mixture. 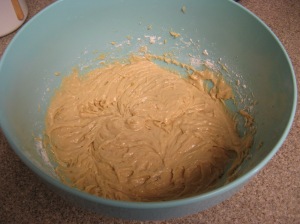 Once the batter was well combined I divided it into two bowls and added the Nutella to one of them.

To get the marbled effect I alternately spooned the banana and the Nutella-banana batters into my prepared 9-inch loaf pan (I just sprayed it with baking spray) and then swirled it with a knife. 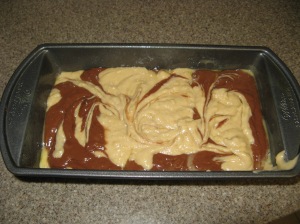 After baking for an hour in a 350 degrees F preheated oven the bread was done.

I let it cool for a bit and then sliced a few slices to see the marble effect and of course to try it and it was delish!

In a medium mixing bowl, sift the together flour, baking powder, baking soda and salt. In a large mixing bowl, using a mixer on medium speed, beat together banana, butter, granulated sugar, brown sugar and vanilla until creamy and well combined – about 2 minutes. Beat in eggs until well combined – about 2 minutes. Reduce speed to low and beat in flour mixture until just combined.

Divide 1/2 of the batter into a medium bowl; stir in Nutella until combined.

Alternate spoonfuls of batter into loaf pan until all of the batter is used up. Swirl batter gently with a knife (not too much!).

Bake 1 hour or until well risen, deep golden brown, and a toothpick inserted into bread comes out with moist crumbs attached.

Today on my blog... Hot Cocoa Bombs.
Today on my blog... A Hidden Heart Bundt Cake. Head over to my bog (link in profile) to learn how to make one for your Valentine!
Animal Crossing themed birthday cake.
Crocheted Heart Garland... find the pattern for the hearts on my blog now. Link in profile.
Get the pattern for this fun and quick Crocheted Heart Table Runner on my blog today.
I didn’t feel like taking down my Christmas Tree, but I also didn’t want to leave Christmas ornaments on it so I decided to turn it into a Valentine’s Day Tree.
Homemade Spinach & Mushroom Stromboli
I had 1 overripe banana, not enough for banana bread, so I decided to tweak a recipe and make a small batch of Banana Nut Muffins. Get the recipe on my blog today.
A pile of crocheted hearts to be stitched together