I recently went to Georgetown Cupcake – if you haven’t tried them and you get the opportunity to do so definitely do it, even if you have to wait on a ridiculously long line – to get some cupcakes and while I was there I picked up one of their menus. While they have staple cupcakes they make every day they also have a daily (and monthly) rotating schedule of specialty flavors that they offer as well. One of those specialty flavors is a Lemon Berry cupcake – a lemon and raspberry cupcake with a raspberry frosting topped with a candied lemon – which gave me the idea for a basic lemon cupcake with a raspberry whipped cream frosting which then turned into a raspberry cream cheese frosting. I could have sworn I had a recipe for lemon cupcakes among my recipe stash, but, I couldn’t find one so I turned to Allrecipes to do so. I like using recipes from their website since you can scale them down to whatever serving size you need. After reading through a few recipes I settled on one submitted by Megan C. that was initially scaled for twenty-four cupcakes and I scaled down to twelve. The directions also have a recipe for a Blackberry Buttercream which sounds pretty good as well.

I started by assembling all of my ingredients for the cupcakes: sugar, butter, an egg, vanilla extract, flour, baking powder, milk and a lemon.

Using a Microplane I grated half of the lemon to get the zest and then squeezed it to get the juice.

To make the batter I started off by creaming together the sugar and butter and then adding in the egg.

Once the egg was mixed in well I added in the vanilla extract.

Next up the flour.

Then the milk, lemon zest and juice. 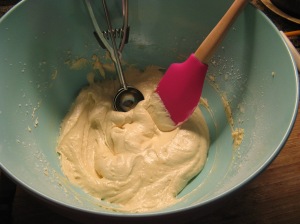 After baking for 20 minutes in a 350 degrees F preheated oven they were done. As I suspected, the cupcakes by no means baked-up to fill the entire liner. Oh well, at least I know for next time that if I am going to make twelve I should scale the recipe to make eighteen cupcakes. 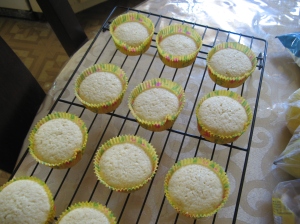 While the cupcakes cooled I got to making the frosting.

As I mentioned before, I was initially planning on making a raspberry whipped cream frosting but decided to make a cream cheese frosting instead since I figured it would hold up better and be a little richer with the lemon cupcake. I actually didn’t follow a specific recipe for it since I’ve made cream cheese frosting quite a few times before and it’s fairly simple. I opted to cut back on the confectioners’ sugar so it wouldn’t be too sweet with the addition of the raspberry jam.

I started by creaming together one stick of unsalted butter and an 8oz. block of cream cheese with a teaspoon of vanilla extract.

I then added in 2 cups of confectioners’ sugar. 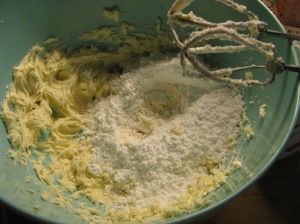 And finally 1/4 cup of seedless raspberry jam. It came out to be a nice shade of pink actually.

Once the cupcakes were completely cooled I piped the frosting onto each of the cupcakes using a large star tip. 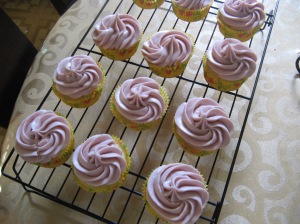 Final verdict… They were quite yummy, especially the frosting. I plan on using it again for chocolate or vanilla cupcakes.

3. Cream sugar and butter in the bowl of a stand mixer until fluffy. Beat in egg and vanilla extract.

4. Beat in flour and baking powder until thoroughly combined; beat in milk, lemon juice, and lemon zest to make a smooth batter.

5. Spoon the batter into the prepared muffin cups.

6. Bake in the preheated oven until cupcake edges are slightly golden brown and a toothpick inserted into the center of a cupcake comes out clean, 20 to 25 minutes. Cool cupcakes completely.

Begin by creaming the cream cheese and butter together and then add in the vanilla extract. Reduce the speed of the mixer to low and add in the confectioners’ sugar, once the sugar is incorporated add in the raspberry jam and continue mixing on medium speed.