Baking has always come naturally to me, cooking on the other hand is a whole other ballgame. I’m always apprehensive that I will under season or worse over season things, but lately I have become a bit more confident (or maybe I should say comfortable) with my cooking abilities. There is one thing that still frustrates me though… Figuring out what to cook, especially for dinner. As such was the case one day last week. I really was at a lost as to what to make, then while picking up some produce the light bulb in my head turned on and I thought stuffed peppers…. Hence Last Minute Stuffed Peppers. Customarily for a dish like this I would turn to a recipe, but I decided to wing it and create something on my own and a bit from memory from the last time I made them. 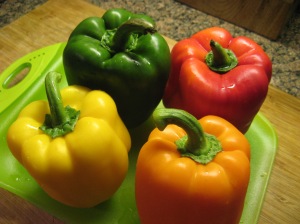 I began making the filling for the peppers by sautéing sliced mushrooms in olive oil. Once they cooled I chopped them up and placed them in a large bowl. 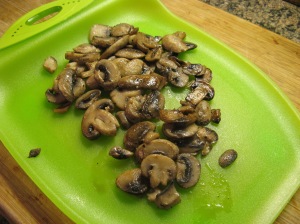 In the same pan I used to sauté the mushrooms I then cooked a pound of ground beef which I seasoned with salt, pepper, garlic and onion powder and half a red onion chopped. I then added this to the bowl with the mushrooms.

I then added in a cup and a half of cooked brown rice to the mushroom meat mixture. To cook the brown rice I opted to use the 30 Minute Cooking Method; you bring a large pot of water to boil, stir in at most 2 cups of brown rice, bring the water to a boil once again and allow the rice to cook uncovered for 30 minutes. 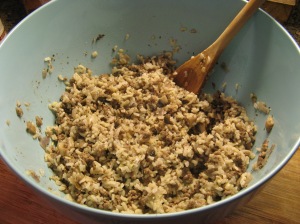 And finally I added in about 1/3 cup of jarred spaghetti sauce and a 1/2 cup of shredded mozzarella cheese to the rice mixture. I mixed it together well and set it aside.

Next I prepped the peppers. I sliced the tops off the peppers and cleaned out their insides while I brought a large pot of water to boil. I boiled each of the peppers for about 4-5 minutes. I wanted the peppers to be tender but still a bit rigid so they wouldn’t tear when I stuffed them. I placed them in an 8 x 8 baking dish that I coated with about half of the sauce I had left in the jar. 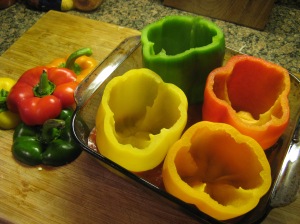 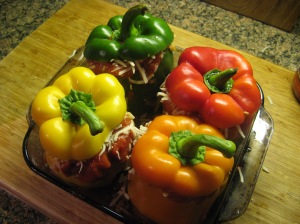 I placed the dish in a 350 F preheated oven for about 20 minutes, until the cheese was melted and I was sure that the filling had enough time to heat through. 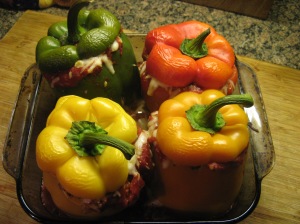 Prior to enjoying one I sliced it in half and added some of the spaghetti sauce that was in the bottom of the dish. Oh yes, and I added some extra vegetables to this dish by serving it with fresh okra on the side. 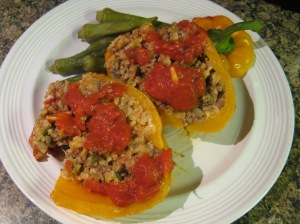 My Last Minute Stuffed Peppers were delish! Definitely something that I will be making again. And best of all, it gave me a small boost in my cooking confidence.

2. Heat the olive oil in a large skillet over medium-high heat and add the mushrooms. Cook the mushrooms until they are tender and lightly browned, stirring occasionally. Remove them from the skillet and once they cool chop them up and place them in a large bowl.

3. In the same skillet, cook the ground beef along with onion and season with the salt, pepper, onion and garlic powder. Once the beef is cooked add it to the bowl with the mushrooms.

4. Add the brown rice to the bowl with the beef and mushrooms along with 1/3 cup of the spaghetti sauce and 1/2 cup of the shredded mozzarella. Mix the contents together and set aside.

5. Bring a large pot of water to boil. Meanwhile prep the peppers by slicing off their tops (set them aside) and cleaning out their seeds. Once the water is boiling add the peppers and leave them in the water for about 5 minutes; until the peppers are softened but not to the point where they are going to tear when stuffed.

Happy Valentine’s Day!
I can’t remember the last time I decorated cookies with royal icing, but, I decided to brush off the technique this year to make these to celebrate Valentine’s Day!
Get the recipe for this Slow Cooker Banana Bread Pudding on my blog today. Link in profile.
Sunrise at the shore.
The Shimmery Sheet Cake I made for NYE!
My top nine on Instagram vs. my favorite nine.
Merry Christmas!!!
Christmas Morning Breakfast is prepped and ready for the oven... Baked Almond French Toast.
Merry Christmas Eve!