For today’s Slow Cooker Sunday recipe I am bringing you dessert. Rice Pudding… One of my favorite desserts. And this is probably the simplest Slow Cooker item I have ever made hence this super short blog post.

In the bowl of my slow cooker I added all of my ingredients: Arborio rice, whole milk, water, sugar, salt and a cinnamon stick. Now, the true title of this rice pudding recipe was for a Moroccan Rice Pudding, but, since I opted not to use the orange water that was listed in the ingredient list I am assuming it’s just a plain rice pudding. I gave everything a good stir and then set it to cook on low…

And after a short 4 hours my rice pudding was ready. Now, you might be tempted to leave it on longer since the rice will be tender, but, there will still be a considerable amount of milk left, but don’t. As the rice pudding cool it continues to absorb the liquid and it will be creamier.

You can opt to top it with ground cinnamon or nutmeg or toasted walnuts or almonds. I opted to eat mine as is and I must say it’s one of the best rice puddings I have ever had. I feel that using a cinnamon stick as opposed to ground cinnamon allowed for a cinnamon flavor that wasn’t as pungent and more of an essence. If that makes any sense… I hope it does! I hope you try it and that you like it as much as I did.

In the bowl of a 4-Quart slow cooker add all of the ingredients. Stir well. Cover and cook on high for 2 1/2 hours or on low for 4 hours.

There are just some things you can’t resist ordering when you go to certain restaurants; you know you should try something new and exciting but those familiar comforts just always call your name. One of those things for me is a dessert that I always must have when I go to an Indian restaurant: Kheer, i.e. Indian Rice Pudding. It’s more or less like your traditional rice pudding, but, what sets it apart is the addition of cardamom and pistachios. I finally made this delicious treat myself recently when I realized that I had these two key ingredients on hand. 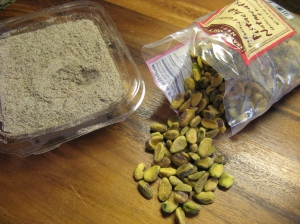 To begin, I combined a cup of cooked basmati rice with whole milk in a medium-sized saucepan and brought it to a boil. Following that I lowered the heat and simmered the rice and milk until the mixture began to thicken. Next I added in heavy cream, coconut milk, sugar and cardamom and cooked it on medium heat until the mixture began to thicken once again. I then removed the pan from the heat and stirred in pistachios.

I then transferred the mixture to a dish and placed a piece of plastic wrap directly on the surface. After letting it cool for a few minutes I then placed it in the refrigerator. 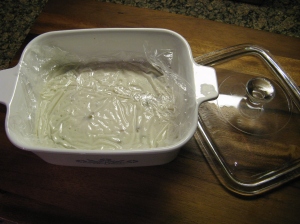 Once it was cool I enjoyed a bowl of it and was in heaven. It tasted just like the Kheer I am used to having at my favorite Indian restaurants.

2. Increase the heat to medium, add the heavy cream, coconut milk, sugar and cardamom and continue to cook until the mixture just begins to thicken again, approximately 5 to 10 minutes. Use a whisk to help prevent the cardamom from clumping.

3. Once the mixture begins to thicken, remove from the heat and stir in the pistachios. Transfer the mixture to a glass dish and place plastic wrap directly on the surface of the pudding. Serve chilled or at room temperature.

My favorite season has arrived…Fall! There are many reasons why I love this time of the year. There’s the foliage, the apple picking, the concord grapes, all the different types of squashes available at the supermarket, the great hair days (the crisp cool air of the Fall is perfect for curly hair), the return of scarves (they are my third favorite accessory behind shoes and handbags) and one of my favorite flavors – Pumpkin – becomes available in just about anything and everything! So, I decided to welcome Fall this year with two pumpkin treats – a new recipe, Pumpkin Rice Pudding and an oldie (but goodie) from last year, Pumpkin Doughnuts.

I don’t think I know anyone who likes rice pudding as much as I do, or for that matter I am not sure I know anyone who likes it period. I guess it’s like bread pudding, you either like it or you don’t. I actually did try my hand at a Pumpkin Bread Pudding a few years ago but wasn’t all that thrilled with the minimal pumpkin flavor it had. Maybe I’ll have to revisit that recipe one day soon, but, back to the rice pudding. I came across this recipe while flipping through the circulars of my Sunday newspaper. The recipe was specific for Minute Rice, but, since I didn’t have any and honestly didn’t want to buy any I decided to revamp the recipe using Arborio rice which I already had on hand from make rice pudding not too long ago.

I began by cooking the rice until it was al dente, about 15 minutes.

In another saucepan I combined evaporated milk, pumpkin, dark brown sugar, pumpkin pie spice and vanilla extract and brought it to a simmer.

I then added the rice to pumpkin mixture and cooked it over low heat until the mixture started to thicken. I then transferred the rice pudding to a large bowl and cooled it to room temperature before refrigerating it.

Since I had about 2 cups of pumpkin left I decided to whip up a batch of pumpkin doughnuts so it wouldn’t go to waste. Hopefully I won’t suffer from pumpkin over-load too early in the season!

So, what’s the most out-of-the-box pumpkin flavor item you have seen on your store shelves?

1. Bring water and salt to a boil in a saucepan. Add the rice, return to a boil, then reduce the heat to low. Stir the rice occasionally and cook until the rice has absorbed the water but is still al dente, about 15 minutes.

2. In another saucepan, bring the evaporated milk, pumpkin, sugar, pumpkin pie spice and vanilla extract to a simmer. Add the cooked rice and cook at a simmer over medium-low heat until the rice absorbs most of the milk mixture and it starts to get thick and silky, about 10 to 15 minutes.

3. Transfer the pudding to a large bowl and cool to room temperature. Place in refrigerator until cool and set.

1/2 cup canola oil, plus more for the pans

1. Heat oven to 350° F. Lightly oil two 6-compartment doughnut pans (or use 1 pan and bake in batches). Whisk together the flour, baking powder, pumpkin pie spice, salt, and baking soda in a medium bowl; set aside.

2. In a separate bowl, whisk together the pumpkin puree, granulated sugar, brown sugar, oil, egg, and vanilla. Add the dry ingredients and mix until just combined (do not overmix).

3. Spoon 1/4 cup batter into each compartment of the prepared pans. Bake until the doughnuts are golden brown and spring back lightly when touched, 12 to 14 minutes. Let cool in the pans for 15 minutes, then transfer to a wire rack to cool completely.

It’s been about a month since I last posted and it’s not for the lack of baking, beading or knitting. I did a bunch of baking for a friend’s birthday earlier this month but stuck to treats that were among his favorite and ones that I have blogged about before- my newly discovered pumpkin doughnuts, mini chocolate-chip cheesecakes and a strawberry shortcake birthday cake. As for knitting, I recently completed two scarves which I plan to post about soon – a ruffle scarf for a friend and a cowl neck for myself. I liked the ruffle scarf so much I am planning on making one for myself. And finally beading, after about a four month hiatus I finally picked up some beading needles and started making jewelry again. But in between all of that I did try out two recipes for what I like to call comfort desserts – a pound cake and a rice pudding. I know rice pudding is not most people’s cup of tea when it comes to desserts, but it has been a favorite of mine for quite some time. Both of these recipes are super easy to follow and turn out some delicious treats.

Mix flour and baking powder; set aside. Beat cream cheese, butter, sugar and vanilla in large bowl with mixer until blended. Add eggs, 1 at a time, beating after each until blended. Gradually beat in flour mixture on low speed until blended.

Bring water, salt, and butter to a boil in a medium saucepan. Add the rice, return to a boil, and then reduce the heat to the lowest setting. Shake the pan occasionally and cook until rice has absorbed the water but it still al dente, about 15 minutes.

Bring milk, sugar, vanilla, and a few dashes of cinnamon to a simmer in a separate saucepan. Add the cooked rice and cook at a simmer over medium-low heat until rice absorbs most of the milk and mixture starts to get thick and silky, about 10 to 15 minutes.

Transfer pudding to a large bowl and cool to room temperature. Place in refrigerator until cool and set. Serve with whipped cream and a dash more cinnamon.