While at Jo-Ann’s a while back I came across one of Red Heart’s new ruffle yarns, the Boutique Filigree Yarn, which is quite similar to their Boutique Sashay Yarn I used to create ruffle scarves last year. The main difference between the two is that the Filigree yarn is described as a woven fabric strip while the Sashay yarn is flat out called a yarn. After working with both yarns I can honestly say that I prefer working with the Filigree yarn since I didn’t have to stretch it open to use it like I did with the Sashay yarn. What caught my eye about the yarn was a nice shade of purple – called Imperial – that I thought would be the perfect color for a scarf for a friend who would be celebrating a birthday soon.

Using the Halley’s Comet Scarf pattern – which was included on the inside of the yarn wrapper – I created this scarf in less than 2 hours. 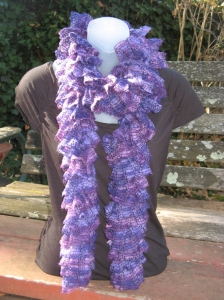 I liked it so much – thankfully my friend like hers as well – that I went ahead and knitted one for myself in a shade of blue called Tealy. 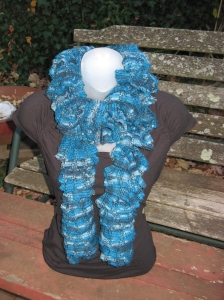 And since I was on a roll with knitting I decided to knit up a cowl that I have been wanting to make for quite some time. To create it I followed a pattern that I came across on Ravelry called the Drop Stitch Cowl and used Lion Brand yarn’s Hometown USA in Little Rock Granite. I initially made the cowl following the directions of casting on 47 stitches but once I finished it it was too big so I decided to start over and casted on 33 stitches. While the final product is a tad bit snug to get over my head, I am hoping that it will stretch out over time. 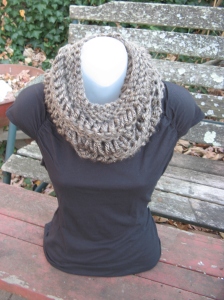 Feliz Cinco De Mayo! Celebrating on my blog today with these Coconut Lime Crumble Bars. Link in profile.
I made these quick and easy cheese danishes with leftover cream cheese frosting and frozen puff pastry. Find out how on my blog today.
Today on my blog a nice alternative to pound cake... Mascarpone Cake.
I was at the craft store picking up supplies for a project and I ended up getting supplies to make a new Spring/Summer wreath for my front door.
A small crack didn’t take away from how delish this Tiramisu Cheesecake was. Get the recipe on my blog today.
Most of the yarn projects I have made lately have been crochet, but, I broke out my knitting needles to try out this Comfy Cotton Blend yarn from Lion Brand.
I recently finished this ripple stitch baby blanket for a dear friend who is having a baby soon.
Happy Easter!
Easter M&M Chocolate Chip Cookies