I love texture when it comes to most things, i.e. nuts in brownies, sprinkles on cupcakes (and ice cream of course), so it’s no surprise that while I do enjoy plain old vanilla and chocolate ice cream I am partial to those flavors that have some sort of bite to them. Hence me making Mint Chocolate Chip Ice Cream. Well, the other reason for me making this particular flavor… Once the weather gets warmer mint grows wild around my yard. Usually I ignore it and let it grow as it is a good deterrent with squirrels digging holes everywhere in search of food, but this year I got the idea to make mint chocolate chip ice cream with it. 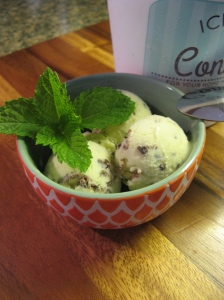 After collecting and rinsing 2 cups of fresh mint leaves…

I combined them along with whole milk, sugar, cream and salt in a saucepan and simmered the mixture over medium heat, stirring it occasionally until the sugar dissolved. I then removed the pan from the heat and let the mixture steep for 30 minutes. 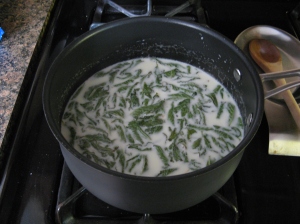 I took a cup of the warmed milk and slowly added it to a bowl with whisked egg yolks; while adding the milk I whisked the mixture constantly to temper the eggs. If tempering is not done properly you can end up with scrambled eggs. 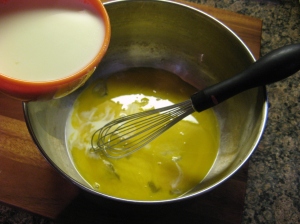 Once the eggs where tempered I added them to the remaining milk mixture on the stove and stirred the combined mixture constantly to form a custard.

Following that I strained the custard through a sieve into a medium-sized bowl. After letting the custard cool for a few minutes I covered it and refrigerated it overnight. I was a bit concerned when I saw that my custard was yellow – I feared that my ice cream was going to be this color. Green & white are cool for mint ice cream, but yellow not so much!

The following day I transferred the mixture to the bowl of my ice cream maker and once it started to firm up I added in chopped semi-sweet chocolate to the ice cream.

Final outcome… Well, thankfully it didn’t end up being yellow! The flavor is definitely different than store bought mint chocolate chip ice cream. It has more of an earthy flavor and doesn’t have the aftertaste that I find with some store bought ice creams. Also, since the base was custard and not a liquid like I normally make for ice cream it was definitely much creamier and reminded me of ice cream that you sometimes get from “old-time” ice cream shops. I definitely want to try to make this again, but, I think I would use less mint leaves and sugar and instead of making custard I would steep the leaves in milk similarly like when I made Lavender Vanilla Ice Cream.

1. Combine the mint, milk, sugar, cream and salt in a medium saucepan. Bring to a simmer over medium heat and cook, stirring occasionally, until the sugar is dissolved, 3 to 5 minutes. Remove from heat and let steep for 30 minutes.

4. Remove the custard from heat and strain. Let sit until slightly cool, about 10 minutes. Refrigerate, covered, until cold, at least 3 hours and up to overnight.

Happy Thanksgiving!!!🦃🍁
Today on my blog get the recipe for this delish Apple Cranberry Pie. It would be a great addition to your Thanksgiving desserts.
Can’t decide between a brownie or a chocolate chip cookie… Have a Brookie! Recipe on my blog today.
The before the oven and after the oven pics of the Blueberry Pie I made this weekend. It didn’t come out of the oven as pretty as it did going in, but it was delish!
They’re called Mini Pumpkin Muffins, but they are more like Pumpkin Donut Holes… either way they are delish! Get the recipe on my blog today.
Get the recipe for these Pumpkin Blondies on my blog today. Link in profile.
My #wipwednesday project… Seaming together a bunch of granny squares.
Feliz Día de los Muertos!
Happy Halloween… Don’t let the ghosts, ghouls and goblins get you batty!