While scrolling through my Instagram feed I saw a picture of Ice Cream Cone Cupcakes and immediately thought… “I want to try that!” This happens a lot when I am looking at pictures on Instagram. It could be a recipe, a cake idea or a craft project. I recently purchased the supplies for a paint pouring project I saw on AC Moore’s page. I am sure it’s going to be a messy one so I am waiting for a decent weather day to make that outside. I initially thought that the cupcakes were baked in a mini muffin tin and then placed inside of the cupcake cones (silly me!) but after a Google search I learned that no, the cupcakes are actually baked in the cones (even better!) And what was even better than that, I decided that since these were a “fun cupcakes” I would use Funfetti cake mix and lo and behold on the side of the Pillsbury box on Funfetti cake mix were the instructions to make these. 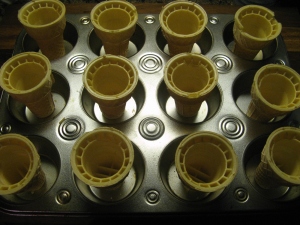 Next, after preparing the batter, I poured about 3 tablespoons of batter into each cone. You don’t want to overfill the cones, if you do, you’ll end up with a cupcake spilling out of the cone once baked. 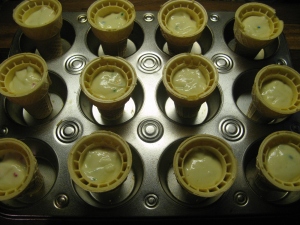 I then baked them in a preheated 350F oven for approximately 25 minutes. 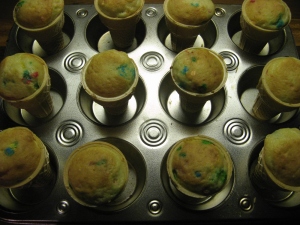 I allowed them to cool completely on a wire rack… 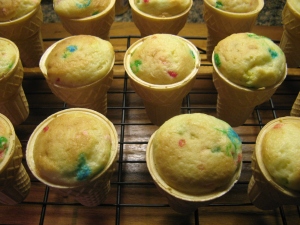 And then piped frosting on each cupcake using a large star tip (I used Wilton size 1M) to resemble a soft serve ice cream cone. And no ice cream cone is complete without sprinkles. 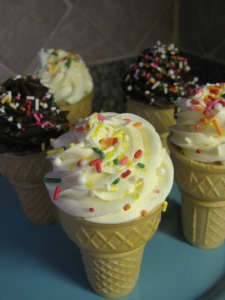 There you have it… Ice Cream Cone Cupcakes. While they are fun and delicious (and probably the perfect treat for a kids party) they do have a downfall, they are top-heavy. Which means transporting them can be a challenge. I dropped a few of them while trying to balance them on a cake stand while walking. Lesson learned!