While pumpkin is predominantly used in dessert dishes, it can also be used to make some delicious savory dishes. Pumpkin is actually really good for you, so, by using it in dishes that aren’t overloaded with sugar you can get some great health benefits from it. It can boost your immune system, protect your eyesight, lower your risk of certain cancers and promote heart and skin health. So, while the past couple of weeks I have brought you pumpkin desserts this week I am bringing you a pumpkin dish that is perfect for the cold days ahead… a Turkey Pumpkin Chili.

As with most chili’s this one is cooked in just one pot and takes minutes to prepare. I started out by sautéing onions and then adding in the ground turkey and spices. Once the meat was browned, I added in the beans, pumpkin, water and chicken broth and continued to cook it until it was thickened. 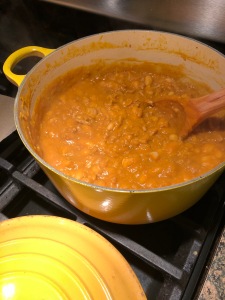 And enjoyed it with a dollop of sour cream and hot sauce on top. 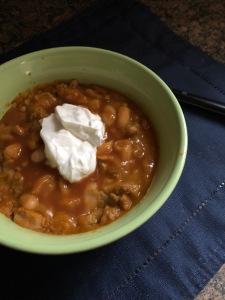 Add in the beans, pumpkin, water and chicken broth to the turkey mixture. Cover the pot and bring to a simmer over medium-high heat, stirring occasionally. Reduce the heat to medium and cook, stirring often until everything is heated through and the chili begins to thicken, about 15 minutes.

Every now and then I do make a pumpkin dish that is not a dessert. I’ve actually made this dish quite a few times (I mentioned it in a post way back in 2013, but, never actually blogged about it) but, this was the first time I followed the recipe and used tortellini as opposed to another type of pasta – usually penne – and I must say it made a huge delicious difference! Some dishes are just better with a little extra cheese in them. One thing though, the leftovers of this dish do taste good, but, it’s much better when you eat it right after you make it because the sauce is super creamy then.

Bring a large pot of salted water to boil and cook the tortellini according to the package directions. Reserve 1/2 cup of the cooking water and then drain the pasta.

While the tortellini is cooking, melt the butter in a skillet over medium-high heat. Add the shallot and cook, stirring until slightly soft. About 2 minutes, making sure not to burn the shallots.

Add the pumpkin and the nutmeg and continue cooking for about another minutes. Stir in the cream and bring to a low boil. Reduce the heat to medium low and let simmer while stirring until slightly thickened, about 5 minutes.

Finally, add in the cheese and continue cooking until thick. Season with the salt and pepper.

Add the tortellini to the skillet with the pumpkin sauce and toss to coat, adding some of the reserved pasta water to loosen the sauce**. Serve topped with parmesan cheese.

*I used a 20oz. package of Buitoni Three-Cheese Tortellini

**I used about 1/4 cup of the reserved water

Slow Cooker Sunday is back! Granted I will put the disclaimer in that I may not be posting every Sunday though. Thankfully I am covered for the next few Sunday’s as I have two recipes in my blog queue that I never posted. It’s a good thing recipes don’t expire! LOL! So, in honor of my first Slow Cooker Sunday post in a quite a few months and since its Fall I bring you a Butternut Squash Soup that’s super easy, super quick and super delicious!

And set it cook on low for 4 hours. Granted the before cooking and after cooking are pretty much the same, but, trust me this was 4 hours later.

I then transferred the soup to a pot and used an immersion blender to blend all the ingredients together until it was smooth. And then finally I stirred in lime juice, which really took the flavor of the soup up another notch. Citrus really does have a way of bringing out and bringing together different flavors. And that was it! 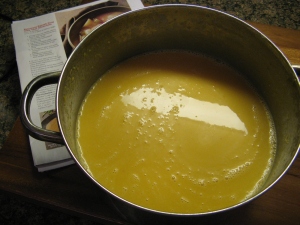 In a 3 1/2 to 4 quart slow cooker, combine all ingredients except for the lime juice.

Use an immersion blender, food processor or blender to blend soup until smooth. Stir in lime juice and enjoy.

While at the supermarket a few weeks ago I came across sugar pumpkins on sale, I thought for a second or two of buying them and making my own pumpkin puree but it was just a fleeting thought at the moment and I stuck with the list of items I had in hand. Once I got home though I was curious as to how difficult it would be to turn those small pumpkins into puree and I was pleasantly surprised at how simple it would be, well, minus the elbow grease and patience. So, a few days later I picked up two pumpkins and got to work.

I began by slicing the top of the pumpkin off. I should say I sawed it off as I did mention it required some elbow grease.

Next, I sliced the pumpkin in half. This was by far the most difficult part. Since my knives were sharpened I probably just need some refresher tips on knife skills. 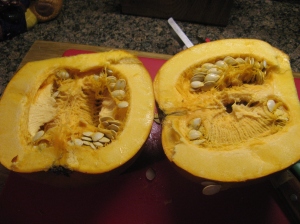 And then scooped out all of the seeds and pulp. 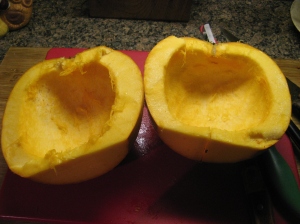 Following that I sliced the halves into halves – or simply put I cut the pumpkin into quarters. I then repeated these steps with the second pumpkin and placed all of the quarters on a baking sheet.

I roasted the pumpkin in a 350 F preheated oven for just shy of an hour until the pieces were fork tender. And I must say the smell of pumpkin in my house was heaven during that hour. 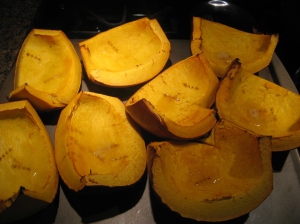 After letting the pieces cool for a few minutes I was easily able to remove the skin from the pumpkin.

And then it was time for the simplest part – well besides roasting the pumpkin – to making the puree, the blending.  I put a few pieces at a time in the bowl of my food processor and added a few tablespoons of water to help the process along.

All in all I ended up with about 8 cups of fresh pumpkin puree. 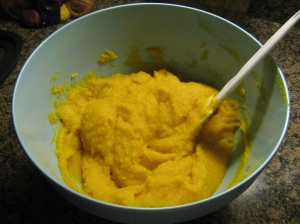 I refrigerated half of it and froze the other half in sandwich bags – putting a cup of puree in each of the bags. 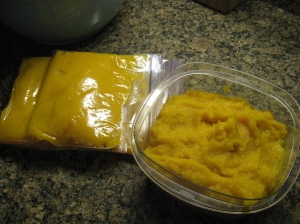 And since I didn’t want that refrigerated puree to go bad I was quick to whip up some delicious treats with it.

There was pumpkin pie, which I must say definitely had a much richer taste with the fresh puree.

And my favorite, a homemade Pumpkin Spice Latte. I usually get one or two of these during the Fall at Starbucks but the coffee flavor is such a turn off for me since I am not a coffee drinker that being able to make this at home and control the coffee amount was perfect! 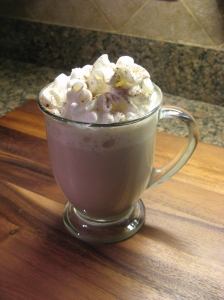 1. Melt butter in a large sauté pan over medium heat. Add the shallots and sauté for 1 minute.

3. Season with salt and pepper and stir in the cream.

4. Remove from the heat and add in the cheese and nutmeg and stir until both are incorporated.

2. Whisk in milk and espresso and bring to a simmer over medium-high heat.

3. Pour into 2 mugs and top with whipped cream and more nutmeg.

If you would like a more detailed description of how to make you own pumpkin puree check-out the directions I followed here from the Pioneer Woman’s (Ree Drummond) website.