I made Twice Baked Potato a month or so ago for the first time the traditional way – in an oven. Just in case you don’t know, Twice Baked Potato is exactly what it says… A potato that’s baked 2 times. First you bake the potato, slice it in half, scoop it out, mix it with some toppings, spoon it back into the potato skins, top it with cheese and bake it again. And it’s delicious! But, I was left wondering if I can bake a potato in the microwave then why can’t make Twice Baked Potato in there also, so, I decided to try it out and I am so happy I did. It came out perfect and just as delicious.

I began by scrubbing two russet potatoes and pricking them with a fork a few times. Next, I baked them in the microwave. Luckily my microwave has a potato button, but, if yours doesn’t the average time is about 8-10 minutes. 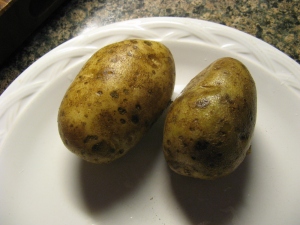 I let them cool for a few minutes and then sliced them in half and scooped out the inside. 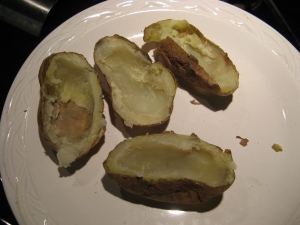 I mashed the potato with butter, sour cream and bacon bits. I then added in shredded cheddar cheese, milk, salt and pepper to taste. 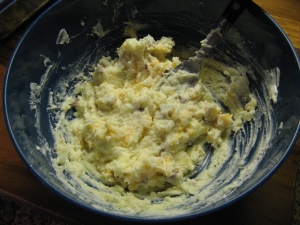 I then spooned the mixture into the potato skins and topped it with some more cheddar cheese. 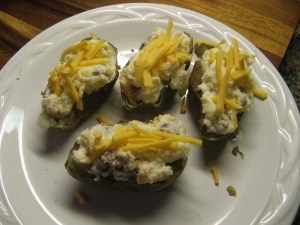 And finally I placed the potato back in the microwave and heated it for about 2 minutes, until the cheese melted.

And that’s how simple it is to make Twice Baked Potato in the microwave!

Twice Baked Potato... In the Microwave

Scrub the potatoes and prick with a fork. Place the potatoes on a microwave safe plate and bake in the oven, using your microwave’s potato button, or for 8 – 10 minutes.

Let potatoes cool for a few minutes and then slice them in half. Scoop out the insides (be careful not to tear the potato skins) and place in a bowl with the butter, bacon bits and sour cream. Mash these four ingredients together and then add in the cheese, milk, salt and pepper.

Spoon the mixture back into the potato skins and top with cheese and return to the microwave for another minute or two until the cheese has melted.

Recipe modified from The Pioneer Woman on The Food Network

Today on my blog... A Hidden Heart Bundt Cake. Head over to my bog (link in profile) to learn how to make one for your Valentine!
Animal Crossing themed birthday cake.
Crocheted Heart Garland... find the pattern for the hearts on my blog now. Link in profile.
Get the pattern for this fun and quick Crocheted Heart Table Runner on my blog today.
I didn’t feel like taking down my Christmas Tree, but I also didn’t want to leave Christmas ornaments on it so I decided to turn it into a Valentine’s Day Tree.
Homemade Spinach & Mushroom Stromboli
I had 1 overripe banana, not enough for banana bread, so I decided to tweak a recipe and make a small batch of Banana Nut Muffins. Get the recipe on my blog today.
A pile of crocheted hearts to be stitched together
Today on my blog... a quick, easy and delicious Rum Cake. Link in profile for recipe.