If you didn’t know, almond is one of my favorite flavors when it comes to dessert. Give me an Almond Croissant for breakfast and I am a happy camper – although that’s not really a dessert item, but, it could be. LOL! Since I am a fan of almond I regularly get the Odense Newsletter that features recipes using their almond paste. In their latest newsletter they had a recipe for Almond Horns that were super simple, I had most of the ingredients on hand and I figured it was time to bake something sweet.

To make the dough I broke the almond paste into small pieces and added it to the bowl of my food processor along with confectioners’ sugar. I mixed the two until it was the texture of fine crumbs. I then added in an egg white (reserving the yolk) and almond flour. I continued mixing the dough until it became a smooth paste.

Next I turned the dough onto my counter that I dusted with confectioners’ sugar and rolled the dough into a 12-inch log and then divided it into 12 equal pieces and rolled each piece into a ball. 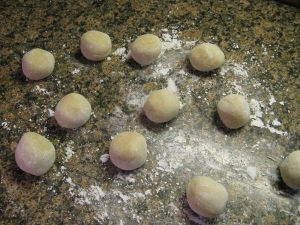 After that I rolled the balls into 3-inch logs that were slightly tapered toward the ends.

I added water to the reserved yolk and beat the two and spread thinly sliced almonds, which I crushed slightly, on a plate.

I then dampened the logs in the egg yolk and rolled them in the almonds bending them into crescents and placed them on a parchment lined cookie sheet that I then placed in the refrigerator for 20 minutes.

While the Almond Horns were in the refrigerator I preheated the oven to 350F. After the 20 minutes, I baked them for 14 minutes and then let them cool completely on a wire rack. 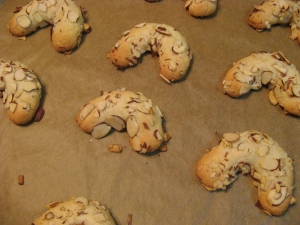 Once they were cooled I melted bittersweet chocolate and dipped the ends of the horns in.

These are so good and so easy and quick to make. The outside is crispy while the inside is moist and chewy.

Using a food processor or mixer combine the almond paste and 3/4 cup of sugar. Mix until the texture is that of fine crumbs. Add the egg white and flour and continue mixing until the dough becomes a smooth paste, it will be slightly sticky.

Turn the dough out onto a confectioners’ sugar dusted work surface and roll into a 12-inch log. Divide the log into 12 equal pieces and roll each piece into a ball. Roll the balls into a 3-inch log that is slightly tapered at then ends.

Spread the almonds on a plate and beat the egg yolk with 2 tablespoons of water. Dampen the logs in the yolk mixture and then rolls in the almonds shaping the logs into a crescent. Place the crescents onto the prepared cookie sheet 2-inches apart and refrigerate for 20 minutes.

Once cooled melt the chocolate in a double boiler or in the microwave. Dip the ends into the melted chocolate and return to the parchment paper so the chocolate can set. Layer the cookies between sheets of wax paper in an airtight container for up to 5 days.

What would the holidays be without some yummy homemade treats? Every year a day or two before Christmas Eve I bake about four or five different types of cookies. This year was no different, although this year baking didn’t seem as stressful as year’s past- probably because I was able to bake on the weekend as opposed to a weekday. Every year I get the idea to bake up actual Christmas cookies with frosting and decorations, but, it never happens. Instead my holiday cookies look more like this…

I also decided to bake a cake for a friend’s Christmas Eve dinner. I wanted to try something new so I went with a recipe that I saw in the December 2012 issue of Food Network Magazine, an Almond Layer Cake with White Chocolate Frosting.

First things first, I got together all of my ingredients together. 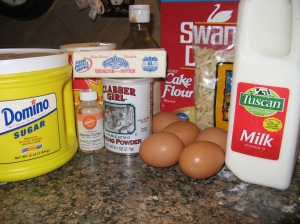 To start off I essentially created a variation of pure almond flour by pulsing together cake flour, baking powder, salt and almonds until the almonds were finely ground down. 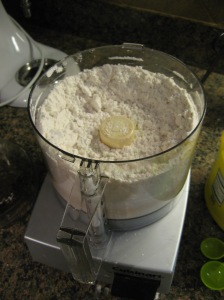 Next up I whisked together egg whites, milk, vanilla and almond extract. While there are almonds in the flour component of the batter, the almond extract is what truly gives this cake its almond taste and scent.

And finally, what cake would be complete without creaming together butter and sugar. 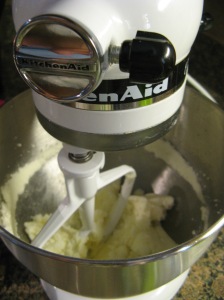 I then incorporated all three of these components to create the batter for the cake.

And then divided the batter among my two prepared pans and popped them into the oven. 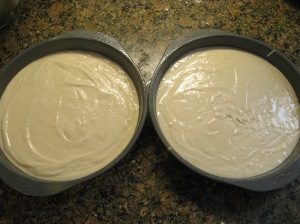 After about twenty-five minutes my cakes were ready to come out of the oven and cool down.

To start frosting I used about a cup of frosting in between the two layers and then covered the cake in a crumb coat and placed it in the refrigerator for 15 minutes.

I then used the remaining frosting to finish covering the cake. Once that was done I covered the cake in some red sparkles I had bought to give it a festive feel. 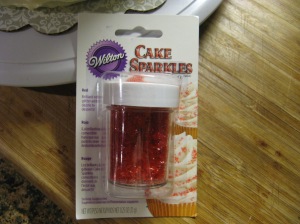 This cake was a HIT! One of my friends said it was like eating a Good Humor Toasted Almond ice cream bar!

Unfortunately everything can’t always be a success. I tried making Rainbow Cookies a few years and I wasn’t too happy with the end result. While they tasted good I wasn’t pleased with the way they looked. I decided to try this year after coming across a recipe in a recent issue of Food Network magazine that seemed flawless enough. Once again though, there wasn’t a pot of gold at the end of my rainbow. I’m not sure if I waited too long to slice them or something went wrong while mixing and baking but they weren’t too appetizing looking. While I could overlook that, I couldn’t overlook the fact that they didn’t have much of a taste. All I could taste was the chocolate and not much of anything else.  After failing twice to get these cookies to somewhat near perfection I doubt I will try again. Sometimes you don’t need three strikes to be out! 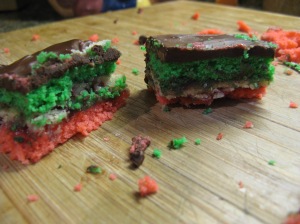 They looked great prior to and after being covered with chocolate, but, as you can see that was short-lived once I started slicing them. Oh well!

Get the recipe for this Slow Cooker Banana Bread Pudding on my blog today. Link in profile.
Sunrise at the shore.
The Shimmery Sheet Cake I made for NYE!
My top nine on Instagram vs. my favorite nine.
Merry Christmas!!!
Christmas Morning Breakfast is prepped and ready for the oven... Baked Almond French Toast.
Merry Christmas Eve!
What my kitchen table looks like after a day of baking... Cookies, cookies, cookies and more cookies!
Antipasti Christmas Tree