I decided to plant a small garden this year. Granted, my garden isn’t your typical one. I opted to plant my herbs and veggies (peppers, tomatoes & zucchini) in pots instead of in the ground. Although, I ended up having to transplant my zucchini plant into the ground when it started to take off and produce a lot of zucchinis, or zucchini flowers which will ultimately turn into zucchinis. 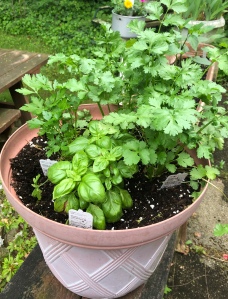 The first thing I ended up picking from my garden was cilantro. I picked this super early, back in the beginning of June.

And decided to make Cilantro Lime Rice with it. 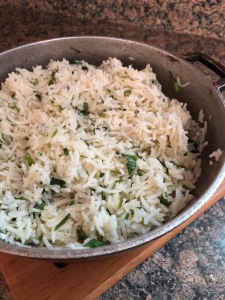 Soon after it got quite hot outside and my cilantro bolted and began to flower. I did a little research and I learned that the flowers would ultimately become seeds and those sees are coriander. So, after letting the coriander seeds stay on the plant for a while they began to brown. I then cut off the stems with the seeds and hung them upside down in a brown paper bag to dry them out. I am planning on crushing the dried seeds into coriander powder.

There’s also some flat leaf parsley in my herb garden that I have been cutting to use in salads.

Also, from my mini herb garden… Basil. I planted three basil plants and while at first it didn’t seem like they were growing, they had a bit of a growth spurt and one of them started to flower. I pinched the flowers off hoping that by doing so the plant will continue to bear leaves.  I ended up picking a bunch of the larger basil leaves off the plants… 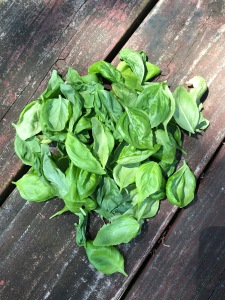 And turned them into a delicious pesto sauce, using walnuts instead of pine nuts. Totally random, but did you know there was a condition called Pine Mouth / Pine Nut Syndrome. With it you end up with a metallic taste in your mouth soon after eating pine nuts, it’s not permanent, but it can last a few weeks. This isn’t the reason why I used walnuts, but something I came across that I found interesting and thought I would share. 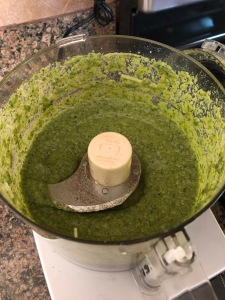 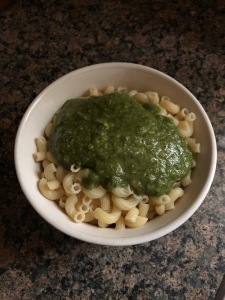 Here are some jalapenos that I grew as well. Thankfully these will keep in the refrigerator for a few weeks until I decide what to do with them.

And here is a picture of my zucchini plant and the zucchini that I recently picked. I learned that you can’t leave zucchini on the plant too long as they will end up with too many seeds. I am hoping that I will have a few ripe ones at the same time so I can make zucchini fries. 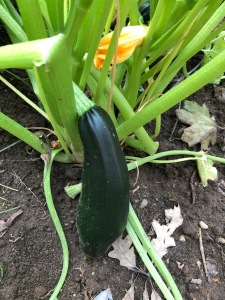 And I also picked some of my tomatoes that have grown to a decent size. I didn’t intend to pick them green. I had one red tomato on the plant that was going bad (it had a huge black spot on the bottom) and when I went to cut it off, two of the green ones came off with it. After doing a little research to make sure that it would turn red sitting on my counter, I went and picked off the other two tomatoes that were also a decent size.

I’m also growing some bell peppers and snacking peppers, but they are not ready for picking yet.

And there you have a tour of my mini garden.

In the bowl of a food processor chop the walnuts into fine pieces. Add the garlic, basil salt and pepper and process until the mixture resembles a paste.

With the processor running, slowly add the olive oil through the feed tube.

Add the parmesan cheese, and process for an additional minute until well combined.

Use immediately or store in an airtight container in the refrigerator for 4 to 5 days. Add olive oil as needed so the pesto does not dry out. Alternatively, you can divide the pesto among an ice cube tray to freeze and once frozen transfer to a resealable bag to have on hand when needed.

One thought on “Walnut Pesto”