Remember a few years ago when people were going crazy with the idea of there being no more  Twinkies available on store shelves due to the bankruptcy of Hostess, well, I wasn’t one of those people. I did find it amusing though how people were selling the packaged baked good on EBay for insane amounts of money. I don’t have anything against Twinkies; I just never found them all that tasty. I always preferred the Hostess snack of Ding Dongs, but, it was something I definitely had to be in the mood for. Thankfully many people got their wish when Twinkies made it back to store shelves after some business negotiations. So, even though I am not a Twinkies fan that didn’t stop me from buying Fat Daddio’s Snackcake Pans when I saw them at Sur La Table in the clearance section for a ridiculously irresistible price of $2.99 each. There are so many flavor combinations that could be made that I was sure I would be able to find my favorite version of the American legend treat! 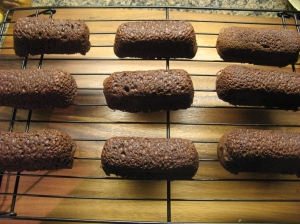 Since I was essentially testing out these pans I decided to use a mix to make the snack cakes.

After prepping the batter according to the box directions…

I then filled each cavity about half-way. I honestly thought that since the mix was enough for 12 cupcakes I would end up with 12 snack cakes, but the batter was only enough for 9.

I baked them in a 350 F preheated oven for 20 minutes and after letting them cool it was time to fill them. I opted for a caramel buttercream filling which was super simple to make as I purchased prepared caramel sauce as opposed to making it myself. 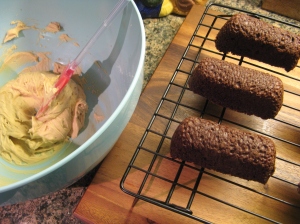 Using a Wilton No. 230 tip I was able to fill the snack cakes without much mess or fuss.

Final verdict… You can’t go wrong with the flavor combination of chocolate and caramel! These were a hit that went super-fast. 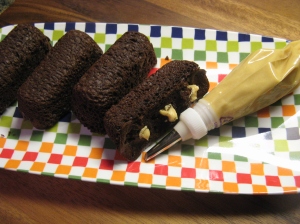 1. Using an electric mixer beat the butter at medium speed until creamy.

2. Reduce the speed to low and gradually add in the sugar and beat until well combined

3. Add caramel sauce and vanilla extract and continue beating until all ingredients are incorporated.

One thought on “Chocolate Snack Cakes with a Caramel Buttercream Filling”