Rhubarb… Those red celery-like stalks that you see in the supermarket during the spring time that you always wonder “what can I make with those?” The usual answer is pie. Recently I was at the supermarket and came across them while looking for raspberries and decided to pick up a pack unsure of what I was going to make with them and then I remembered a cupcake recipe I had seen in Martha Stewart’s Cupcakes cookbook.

Before whipping up the batter, I did a little prep work. I whisked together flour, baking soda, baking powder and salt in a bowl and set it aside and I diced up enough rhubarb for 2 cups.

Then, in the bowl of a stand mixer I creamed together one stick of butter and one cup of sugar until it was pale and fluffy. And then added in two eggs one at a time and finally vanilla extract.

Now it was time to incorporate the flour mixture, rhubarb, and sour cream into the butter mixture.

With the mixer on low speed I added in the flour mixture in two batches, alternating with the sour cream and then folded in the diced rhubarb. 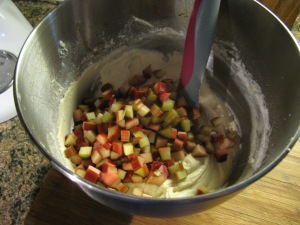 Following that I divided the batter among lined cupcake tins and baked them in a 350 F preheated oven for 25 minutes, rotating halfway through.

The cupcakes right out of the oven… I immediately transferred them to wire racks so they could cool completely while still in the pan.

While these cupcakes were delicious all on their own, I decided to whip up a batch of whipped cream to top them.

And dolloped a few of them with some added sweetness…

These cupcakes were incredibly moist and fluffy… The way a perfect cupcake should be! After making these I am in no rush to try rhubarb pie.

2. With an electric mixer on medium-high speed, cream butter and sugar until pale and fluffy. Add eggs, one at a time, beating until each is incorporated, scraping down sides of owl as needed. Beat in vanilla extract. Reduce speed to low. Add flour mixture in two batches, alternating with the sour cream, and beating until combined after each, Stir in diced rhubarb.

3. Divide batter evenly among lined cups, filling each three-quarters full. Bake, rotating tins halfway through, until a cake tester in centers comes out clean, about 25 minutes. Transfer tine to wire racks to cool completely before removing cupcakes. Cupcakes can be stored up to 3 days at room temperature in an airtight container.

Whip cream in a large bowl until soft peaks form. Add in the confectioners’ sugar and vanilla extract and continue whipping until stiff peaks form. I usually place the whisk attachment for the mixer and bowl in the freezer for about 15-30 minutes prior to making the cream.

Happy Thanksgiving!!!🦃🍁
Today on my blog get the recipe for this delish Apple Cranberry Pie. It would be a great addition to your Thanksgiving desserts.
Can’t decide between a brownie or a chocolate chip cookie… Have a Brookie! Recipe on my blog today.
The before the oven and after the oven pics of the Blueberry Pie I made this weekend. It didn’t come out of the oven as pretty as it did going in, but it was delish!
They’re called Mini Pumpkin Muffins, but they are more like Pumpkin Donut Holes… either way they are delish! Get the recipe on my blog today.
Get the recipe for these Pumpkin Blondies on my blog today. Link in profile.
My #wipwednesday project… Seaming together a bunch of granny squares.
Feliz Día de los Muertos!
Happy Halloween… Don’t let the ghosts, ghouls and goblins get you batty!