So, I finally got the vase back that I made in an introductory pottery class a little over a month ago.

I was happy with how it looked pre- firing and glazing… 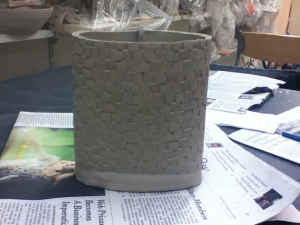 But, I am sad to say that I am not all that thrilled with the final product. While thankfully it didn’t fall apart during the firing and glazing process – which was a possibility – there were quite a few dings and dents in it that weren’t there before and the basketweave pattern that was so obvious before seems to have faded away in certain spots. Oh well… it was a fun experience with some great friends, but, pottery will definitely not be on my hobby list ever. 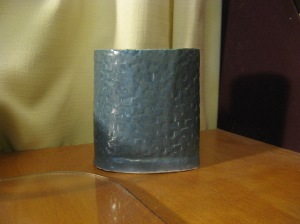 This past Saturday I finally made it to a bead show that I have wanted to check out for a while. The Whole Bead Show comes to New York City twice a year (March & October) and this time around it worked out perfectly since I was going to be in the city for a pottery class on one of the days it was here- more on that later.

There were beads everywhere but it was important to walk around and make sure you got the best deal possible. There were quite a few vendors who sold identical things but with varying prices. And while there was a vast assortment of beads, gemstones and precious stones strung I was a little disappointed that there wasn’t more of a selection of seed beads and Swarovski crystals. I had a list of things I wanted to get but unfortunately those items were nowhere to be found. I was able to get a great deal on the beads I did pick up and I can’t wait to craft these into bracelets, necklaces and earrings. 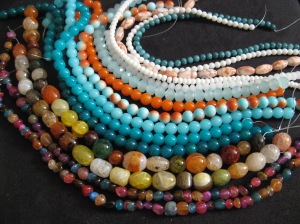 I also picked up a few findings: a toggle, a bag of daisy spacers and a bezel setting ring. 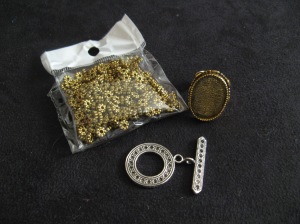 After the bead show I went to an Introductory Hand Building workshop at La Mano Pottery  thanks to a Groupon deal. My friends and I had a lot of fun molding our slabs of clay into vases. Hopefully my vase will survive the firing and glazing process and then I can pick it up in four weeks. I may be willing to take another class one day, but, I definitely don’t see this becoming a new hobby of mine anytime soon.

Here’s a picture of my pre-finished vase. FYI, I didn’t sketch the pattern into the clay. The instructor had a bunch of molds, stencils and doilies that we could choose from to imprint the clay.