This week I am bringing you two different types of bread puddings. A traditional sweet small batch today and a savory one later this week. Both of these came about due to leftover bread after ordering Italian food.

Truthfully, I made this small batch bread pudding twice. The first batch with half of a rustic loaf and then to tweak the recipe I used regular sliced white bread.

First, I sliced the bread into cubes. Now, bread pudding is best made with thick crusty bread to absorb the custard, when I used the rustic bread that was the perfect consistency. With the sliced white bread, it was a few days past its expiration date, and I had it in the refrigerator, so it was kind of stale already. It wouldn’t have hurt to toast it in the oven for a few minutes before using it though.

Next I divided the bread among three ramekins that I lightly greased with butter and placed on a baking sheet.

In a medium bowl I whisked together the contents for the custard – eggs, milk, heavy whipping cream, sugar, light brown sugar, cinnamon, nutmeg and vanilla extract – and then transferred it to a large measuring cup to make it easy to pour and divide among the ramekins. I let them sit for about 10 minutes so the bread could soak in the custard. 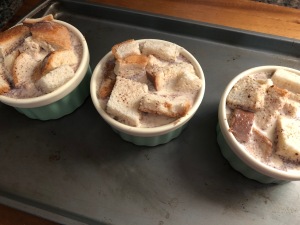 I then baked them in a 350 F preheated oven for about 45 minutes. I knew they were ready when they had puffed up, were golden brown on top and most importantly a cake tester inserted in the middle came out clean. And while the custard did overflow a bit and they were a bit humongous on top they did “deflate” as they cooled. Most importantly though they were delicious. 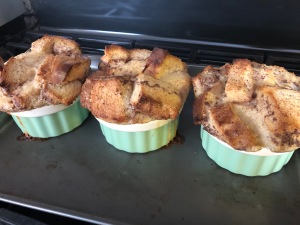 Here’s a pic of the one’s I made with the rustic bread deflated and cooled.

Later this week, a savory bread pudding made with focaccia. YUM!

Preheat the oven to 350 F. Butter three 8oz. ramekins and place on a baking sheet.

Divide the bread among the buttered ramekins.

Whisk the remaining ingredients in a medium bowl. Transfer to a measuring cup and divide the mixture among the ramekins. Let sit for 10-15 minutes so the bread can soak in the liquid.

Bake in the preheated oven for 40-45 minutes, or until a cake tester comes out clean.

Enjoy once cool or refrigerate in an airtight container up to 3 days in the refrigerator.