I can’t remember the last time I had or made ribs. I am pretty sure it’s been over a year, maybe even two. I wasn’t even sure if I still liked them to be honest. Then I came across a recipe for baby back ribs in a slow cooker and they sounded simple (and tasty) enough that I decided it was time to have ribs again.

While the recipe called for 2 small racks of baby back ribs about 2 lbs. a piece, I ended up getting one rack that was 4 lbs. I divided this rack into 4 pieces and then seasoned it with salt and pepper then rubbed them with vegetable oil and sprinkled chile powder over the ribs. Rubbing the chile powder onto the ribs.

In a measuring cup I whisked together teriyaki barbecue sauce, apple cider vinegar, minced garlic and ginger and then poured this into the insert of my slow cooker. I then added in the seasoned ribs and coated them in the marinade. To make sure each rack was coated, I added each rack one-at-a-time to coat. 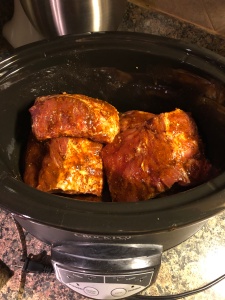 I covered my slow cooker and set it to cook on low for 7 hours. Well, I don’t own a digital slow cooker, so, I actually set it to cook for 8 hours. And intended to take the ribs out at 7 hours, but, I put them to cook overnight so by the time I woke up my slow cooker had already switched to the warm setting… Oops! It was all good though, the meat was thoroughly cooked and thankfully still intact. 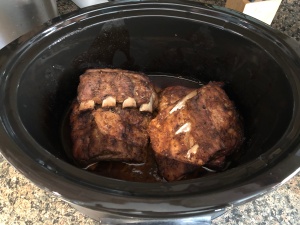 I transferred the ribs to a foil-lined baking sheet bone-side down. In a small bowl I whisked together some of the cooking liquid from my slow cooker, teriyaki barbecue sauce, pineapple preserves and ketchup to make a marinade. I then generously brushed it on the ribs.

I then broiled them on high for about 5 minutes, until the sauce was sticky and the ribs were charred in spots.

I’ll definitely be making these again, but, I think next time I will make them with Honey Barbecue Sauce for a sweeter flavor.

In a measuring cup whisk together 1/3 cup of the barbecue sauce, the vinegar, ginger and garlic and then pour into a slow cooker. Add the seasoned ribs and turn to coat in the marinade. Cover and cook on low for 7-8 hours, until the ribs are tender.

Preheat the broiler. Transfer the ribs to a foil-lined baking sheet bone side down. Remove 1/4 cup of the cooking liquid from the slow cooker and combine with the remaining 1/3 cup of barbecue sauce and the pineapple preserves and ketchup in a small bowl. Whisk together.

Brush the sauce generously on the ribs. Broil until the sauce is stick and the ribs are charred in spots, 3 to 5 minutes.