It’s one thing when a cake is appealing to the eye on the outside, but, when you cut into a cake and reveal a hidden surprise on the inside your eyes widen in wonder and delight. That’s the excitement behind a Piñata Cake. Who wouldn’t want to cut a slice of cake to only have sprinkles and candy come cascading out? A smile (and squeals from little one’s) is sure to follow. The same can be had when the cake itself reveals a pattern or design. Think of a Checkerboard Cake (Sorry for the pictures in both of those posts – Nighttime baking is not a blogger’s friend when it comes to taking pictures.)

I recently made a cake to celebrate a friend’s daughters (aka my nieces) dance recital performance – it was their first. Since I was making a cake for one of their birthdays the day before I didn’t want to make another chocolate cake for their recital celebration. And since I was making a themed cake for that birthday I also didn’t want to make a cake that I would have to heavily decorate – I was actually able to find doll-sized versions of their dancing shoes to top the cake with so I figured that was perfect enough decoration. So, I figured I should do something special with the inside. After a little thought I decided to make a zebra cake with a Nutella mousse filling since they both like the hazelnut spread.

To make things super easy I went with box cake mix – a yellow cake mix and a chocolate cake mix. I prepared both per the box directions. Whenever I use cake mix I normally use Duncan Hines. One of the reasons, and it will sound silly, is because it has a Wilton approved emblem on it. Truth be told though, Duncan Hines is perfect for making a zebra cake because they do not have pudding in the mix which can make the cake batter thick and not ideal for making this cake. 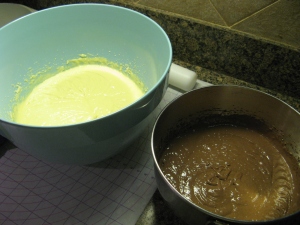 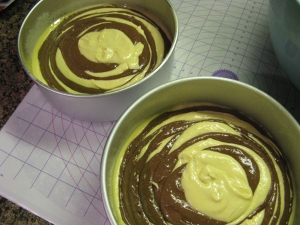 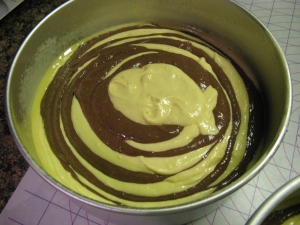 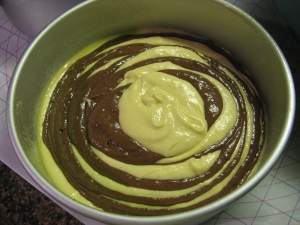 I gently tapped the pans down and then baked them in a preheated 350 F oven for about 45 minutes, until a cake tester inserted in the middle came out clean. I let the cakes cool in the pans for about 15 minutes and then inverted them on cooling racks to cool completely.

One cooled, I torte the cakes to remove the dome that formed on both. The zebra pattern was instantly visible and I was quite excited that it worked. 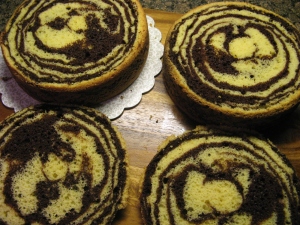 The pattern was even more visible once the cake was layered and cut into. 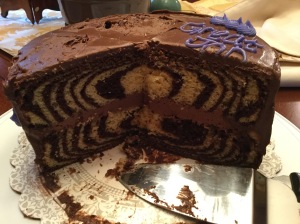 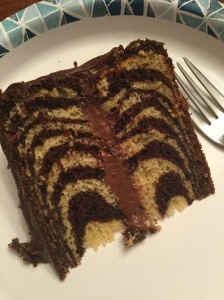 You could really customize this cake. Use a white cake mix and tint it colors to show your team spirit, someone’s favorite colors or even a gender reveal cake.

And here’s a pic of the birthday cake I made the same weekend – An Elena of Avalor themed cake. 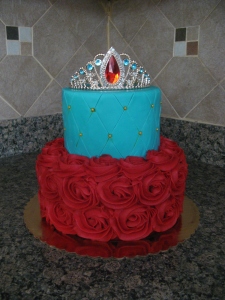