How was your Thanksgiving? Have you eaten the last of your leftovers? At some point were you suffering from a food coma? Mine was good. I was in charge of dessert, and along with a traditional pumpkin pie and the Brown Butter Vanilla Pear PieI posted a few weeks ago I also made an Apple Streusel Dump Cake (come back tomorrow for that recipe) and today’s Chocolate Cream Pie. This pie was a HIT! Not too sweet… The perfect amount of chocolate! The recipe yields more mascarpone whipped cream than needed, don’t toss it, enjoy it with some berries. Use it to top off some hot chocolate. Or, spread it in a thin layer, freeze it and then use small cookie cutters to cut it into shapes to use in lieu of marshmallows in your hot chocolate.

And here’s my trio of pies from Thanksgiving… 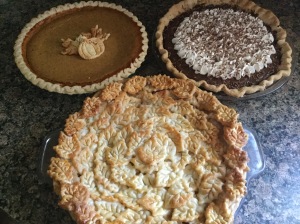 For the Whipped Cream

Make the crust: Preheat the oven to 375 F. Roll out the pie dough into a 12-inch round on a lightly floured surface then fit into a 9-inch pie plate. Fold the overhang dough under itself and crimp the edges. Place a piece of parchment paper inside the pie crust and fill with dried beans or pie weights and bake until the crust is starting to set and brown, about 20 minutes. Remove the parchment paper and the beans/weights and bake for another 5 minutes, until the crust is golden and crisp looking. Let it cool completely.

Melt the bittersweet chocolate in heatproof bowl over a saucepan of simmering water. Using a pastry brush, brush the inside of the pie crust with the melted chocolate in a thin layer, place in the refrigerator to harden.

Make the filling: Pour 2 cups of the milk into a heatproof bowl and set over the pan of simmering water. Heat the milk until it’s almost boiling. Add the unsweetened chocolate and stir until melted. Remove from the heat.

In a large bowl whisk the sugar, cornstarch, flour and salt. Whisk in the remaining 1/2 cup milk and then add this mixture to the hot chocolate milk mixture. Raise the heat of the simmering water to medium-high and return the chocolate mixture over the water. Whisk in the egg yolks and cook, whisking constantly until the mixture is very thick. Remove from the heat and stir in the butter and vanilla until smooth. Let the filling cool slightly and then pour into the pie shell. Place a piece of plastic wrap directly on top of the surface of the filling and refrigerate until cold, at least three hours,

Before serving make the mascarpone whipped cream: Beat the mascarpone, sugar and vanilla extract in a large bowl with a mixer until creamy. Add the heavy cream and continue beating until it holds stiff peaks. Add the cream to a pastry bag fitted with a large star and pipe it on top of the pie. Sprinkle with shaved chocolate.

One thought on “Chocolate Cream Pie”