This cake was a few different things before it finally came to be a Lemon & Raspberry Bundt Cake. First I thought of making a raspberry crumb cake, then I thought of omitting the crumb part and making a raspberry cake with a cream cheese icing drizzle, this is where the lemon came in and I thought of a lemon raspberry cake, then it was a loaf cake and ultimately it became a Bundt cake. While initially I was thinking of sticking with the cream cheese icing drizzle I decided to pass on it so the cake wouldn’t end up being super-sweet. Did you get all that? Long story short… I ended up making a delicious lemon tinged cake that was filled with perfectly sweet raspberries. 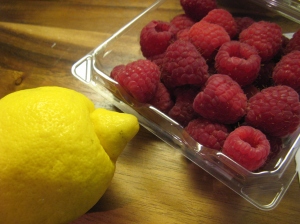 To make the batter I began by creaming together butter and sugar until it was light and fluffy. Following that I added six eggs, one at a time, beating the mixture well after each addition and finally I added in vanilla extract. I put that aside for a moment and in a medium sized bowl I whisked together flour, baking soda and salt. With my mixer set to a lower speed I then added in the flour mixture in three parts alternating with lemon Greek Yogurt. 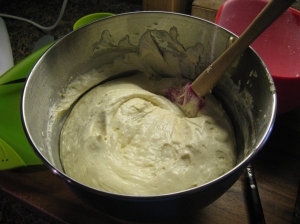 And finally I folded in the juice and zest of one lemon and fresh raspberries which I dredged in flour – dredging the berries in flour prevents them from falling to the bottom of the batter while baking. 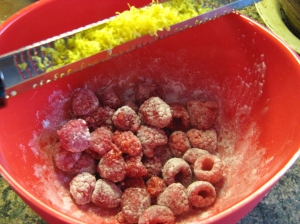 I then poured the batter into a Bundt pan which I sprayed with baking spray and baked it in a 325 F preheated oven. 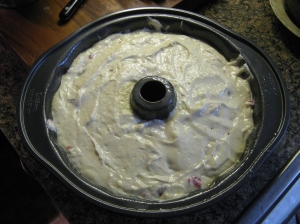 After about 50 minutes the cake was ready to come out of the oven. 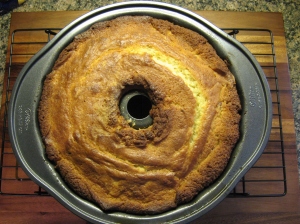 I let it rest in the pan for about 20 minutes and then inverted it onto a wire rack so it could cool completely. 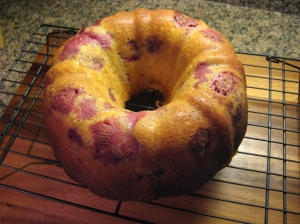 Once cooled, I couldn’t wait to slice into the cake and enjoy a slice, and I wasn’t disappointed, it was absolutely delish. Just the right amount of lemon flavor and the berries were definitely a nice complement to the citrus flavor. And just as important… It was perfectly moist! 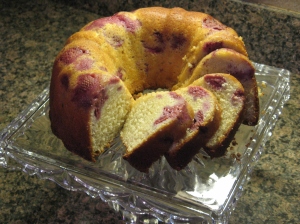 zest and juice from one lemon

*I used 2 5.3-ounce containers of Chobani Greek Lemon Yogurt. You can also substitute with plain Greek yogurt or sour cream.

1. Preheat the oven to 325 F. Prep the Bundt pan by spraying it with baking spray or coating it with butter and then dusting it with flour.

2. Using a mixer beat the butter and sugar on medium speed until light and fluffy – about 5 minutes. Add the eggs one at a time, beating well after each addition and scraping down the sides of the bowl as necessary. Add in the vanilla extract.

3. In a separate bowl whisk together the flour, baking soda and salt.

4. Reduce the speed of the mixer to low and add in the flour mixture in three parts alternating with the yogurt. Mix until just combined.

5. Fold in the raspberries, lemon zest and juice and then transfer the batter to the prepared pan and bake for approximately 50 – 60 minutes, until a cake tester comes out clean.

6. Place the cake on a wire rack and let it cool in the pan for 15-20 minutes before inverting and letting it cool completely.