I have a confession to make; I have never had a s’more. It sounds like a good combination, a roasted marshmallow sandwiched between two graham crackers and a piece of chocolate; then again, I am not a big fan of marshmallows. I used to love them as a child but somewhere along the way I just wasn’t as keen on them as I got older. And then recently, in the July issue of Real Simple magazine, I came across a recipe for S’mores Cupcakes that I thought of trying but then I had the idea of swapping out the graham cracker crumbs in the cupcake for Nilla Wafer crumbs and because I didn’t think that the marshmallow and chocolate ganache would be the right topping for it I decided to create a banana cream cheese frosting to top it off. 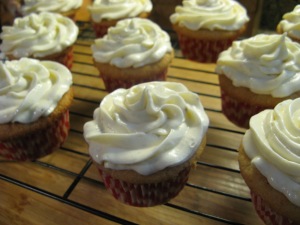 To begin I used a food processor to turn approximately twenty-five Nilla Wafer cookies into crumbs.

I then whisked the crumbs in with flour, baking powder and salt. 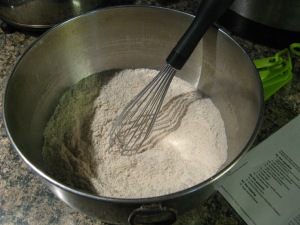 In another bowl I creamed together butter and sugar until it was light and fluffy and then added in two eggs – one at a time – and finally vanilla extract. It was then time to add the crumb mixture along with whole milk to this mixture. 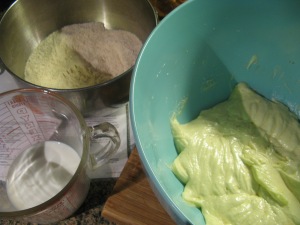 After baking for a little over 20 minutes (I rotated the tin halfway through) the cupcakes were done. I let them cool in the tin for 10 minutes before removing them and letting them cool completely on a wire rack.

And then it was time for the frosting… To begin I used an electric mixer to beat an overripe banana to “liquefy” it. 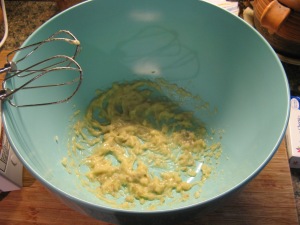 Following that I added in one stick of butter and an 8 oz. bar of cream cheese – both at room temperature – and creamed them together until they were incorporated. To sweeten the frosting a bit I added in 1/2 cup of confectioners’ sugar 1/4 cup at a time. I ended up with a frosting that was quite fluffy.

While it wouldn’t have been a bad idea to let the frosting sit in the refrigerator for a few minutes so it could stiffen up a bit, I opted to frost with it immediately.

1. Heat the oven to 350 F and line a standard 12-cup muffin tin with paper liners. Whisk together the Nilla Wafer crumbs, flour, baking powder and salt in a medium bowl.

2. Beat the butter and sugar in a separate bowl with an electric mixer until light and fluffy, 2 to 3 minutes. Beat in the eggs, one at a time, then the vanilla extract, scraping down the sides of the bowl as necessary. Reduce the mixer to low and add the dry ingredients and milk, alternately, beginning and ending with the dry ingredients and mixing well between additions. Mix until just combined.

3. Divide the batter among the muffin cups. Bake, rotating once, until a toothpick inserted in the center of a cupcake comes out clean, 20 to 24 minutes. Cool in the tin for 10 minutes; transfer to a wire rack to cool completely.

1. Beat the banana with an electric mixer on medium speed to “liquefy” it. Add the butter and cream cheese and continues mixing until all of the ingredients are well combined.

2. Beat in the confectioners’ sugar in 2 additions – 1/4 cup at a time. Continue mixing until the sugar has been completely incorporated.