Normally when I have a few over-ripe bananas I tend to make Banana Nut Bread, but, recently when I had a few bananas that were past their prime for eating in my opinion I decided to make some cupcakes with them instead. Following the recipe Gina’s Banana Cupcakes from the Food Network’s website I made some really moist and delicious cupcakes that weren’t overpowering with the flavor of banana.

I started off by mashing two very ripe bananas. 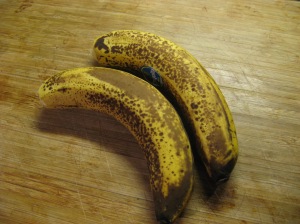 I then combined my dry ingredients (flour, baking powder, baking soda and salt) and set it aside.

To begin making the batter I creamed together butter and sugar.

I then added in sour cream and vanilla. 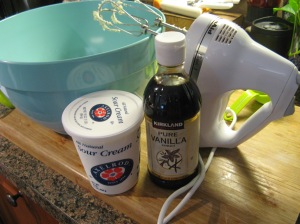 And then two eggs, which I added in one at a time. 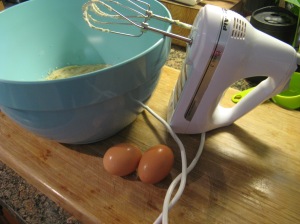 At this point I added in the dry ingredients to the wet mixture. 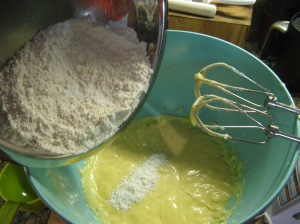 After mixing it well it was time to finally add in the bananas. 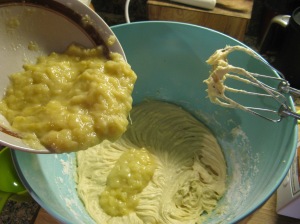 Once the entire banana was incorporated into the mixture I used an ice cream scoop to fill my prepared cupcake pan. 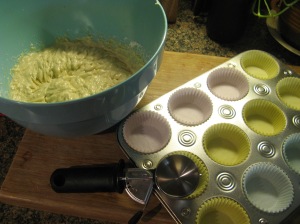 The batter was the perfect amount for twelve cupcakes! 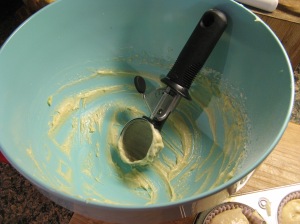 After baking for 18 minutes in a 350 degrees preheated oven they were done and smelled incredible.

I let them cool for a bit before frosting and since I was running a bit short on time I decided to take a short cut and use store bought chocolate frosting. 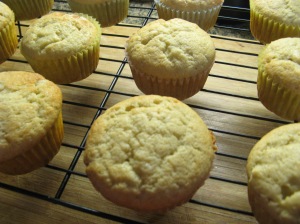 Once they were cooled I frosted them using a piping bag attached with Wilton’s 1M tip to create the 1M Swirl. 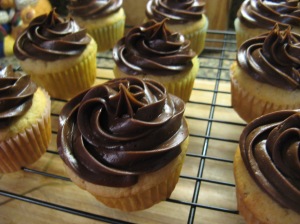 Overall… the cupcakes were absolutely delish! 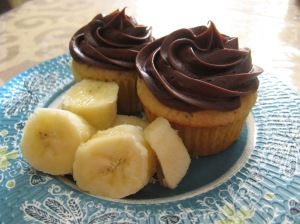 In a medium bowl, combine the flour, baking powder, baking soda and salt. Set aside.

In a large bowl, add the butter and granulated sugar. Beat with a handheld mixer until combined. Add the sour cream and vanilla. Slowly beat in the eggs, one a time. Incorporate the dry mixture and wet mixture together until thoroughly combined. Add the bananas, being careful not to over mix.

Using an ice cream scoop, fill each cupcake liner three-quarters of the way full. Bake in the oven until the tops turn golden brown and a toothpick inserted in the middle of the cupcake comes out clean, 18 to 20 minutes. Remove the cupcakes from the oven to a wire rack and let cool before frosting.

*The original recipe included 3/4 cup walnuts from the batter which I omitted and was paired with a molasses frosting which I opted to replace with a chocolate frosting.

One thought on “Banana & Chocolate Cupcakes”