A few months ago I went out to dinner and for dessert I had Croissant Bread Pudding and it was delicious. Since then I have been wanting to try to make it myself. I finally got around to it this past weekend. I normally make Panettone Bread Pudding so I pretty much knew how to make it, but, I made a few tweaks to make the recipe my own.

I started off by slicing nine croissants in half and tearing up the bottom halves and placing them in a greased glass baking dish – I usually just use Baking Cooking Spray. I then placed the top halves right on top.

I started making the custard by whipping together the eggs and sugar until they were combined.

I then added in the heavy whipping cream, cinnamon, vanilla extract and the raisins along with the rum they were soaking in. 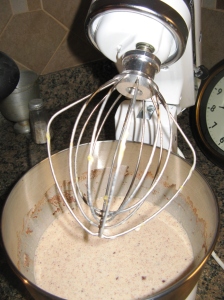 Once that was all combined I poured the mixture over the croissants and pressed them down with a spatula to ensure that they would soak up all of the custard. I let this stand for about 15 minutes before placing it in a 350 degrees F preheated oven.

Since I was completely winging this I was a bit unsure of the baking time. I started off by baking it for 30 minutes covered with aluminum foil and then removed the foil and baked it for an additional 15 minutes. When I took it out the oven it didn’t seem like the custard was completely set so I placed it in the oven for an additional 15 minutes and that did the trick. 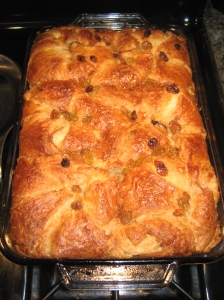 After it cooled I was eager to see if my “experiment” came out well and I am happy to say it did. My friends (aka taste testers) agreed as well.

I am sure I will be making this again, but, with a few changes. I think that instead of throwing all of the raisins in with the mixture I will layer some of them between the torn pieces of croissants and the top halves. Also, I think I will start off by baking it covered for 45 minutes and then removing the foil for the final 15 minutes.