I recently received a Le Creuset Dutch oven as a gift and couldn’t wait to use it. I’ve actually wanted one of these for a while after seeing it used during a cooking demonstration and also because so many recipes I come across call for one. Before using it to cook something though I opted to bake something first, so, I decided on something fairly simple, a Peach Cobbler. Since I didn’t have a recipe on hand I did a quick search on Food Network’s website and found a recipe from Paula Deen that was simple to follow and quick to make.

In my prepared Dutch oven -I sprayed it with cooking spray- I added the mixture of 2 cans of peaches, Bisquick, sugar and cinnamon. 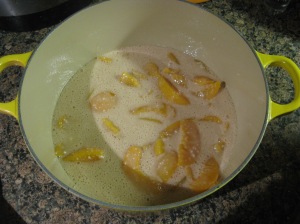 In a Ziploc bag I mixed together the following ingredients to make the dough topping: more Bisquick, sugar, butter and milk.

I then dropped pieces of the dough on top of the peach mixture and sprinkled it with cinnamon sugar and then popped it into my 350 degrees preheated oven.

After 45 minutes it was done!

Unfortunately while it looked and smelled delicious I wasn’t thrilled with the way it tasted. It was lacking in flavor so I doubt I’ll be making it again.

Below is the recipe I followed. One thing to note, I opted not to use blueberries.

2 (16-ounce) cans sliced peaches in heavy or light syrup, or in fruit juice, your choice

Preheat oven to 350 degrees F. Spray a Dutch oven with vegetable oil cooking spray Drain 1 can of the peaches. Combine both cans of peaches, including the juice from the undrained can, the blueberries, if using, the baking mix, sugar, and a sprinkling of cinnamon. Place this mixture into the Dutch oven. To make the topping: Combine the biscuit mix, sugar, butter, and milk in a resealable plastic bag. Drop bits of dough, using your fingers, on top of the peaches. Sprinkle with cinnamon sugar. Place the Dutch oven into the preheated oven and bake for 45 minutes, until the top is golden brown and crusty.