I would like to say Slow Cooker Sunday is back, but, considering I don’t have many slow cooker recipes lined up to try I will say that it will slowing be appearing on Sunday’s. I have been focused on getting recipes together for the holidays, finishing up some craft projects, holiday crafts and a few other things. While I have been trying out new baking recipes when it comes to cooking I have been taking the easy route and making stuff that I am familiar with, can make quickly and require minimal ingredients. Today’s recipe is actually a two-parter. While you can use the chicken for this recipe to make some delicious tacos or burritos, I used it to make a Skillet Tamale Pie. That recipe will come later in the week.

To begin I placed 4 boneless chicken thighs in the insert of my slow cooker. I sprinkled about half of a 1 oz. package on taco seasoning over the chicken and then tossed the two together to coat the chicken. I then poured a 24 oz. jar of salsa over the chicken and gave everything a good stir. I covered the slow cooker and set it to cook on low for 4.5 hours. 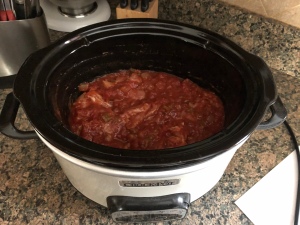 After 4.5 hours I removed the chicken from the slow cooker and shredded it using two forks. I placed the cover back on my slow cooker so the sauce in there could remain warm. Without the cover on, slow cookers begin to lose their heat quickly.

Once shredded, I returned the chicken to the slow cooker and added in the remaining taco seasoning. I gave everything a good stir and then covered it and let it continue to cook on the low setting for an additional 30 minutes.

Add the chicken to a 4 to 5 qt. slow cooker and toss with half of the taco seasoning mix.

Pour the salsa over the chicken and stir to combine. Cover, and cook on low setting for 4 to 4.5 hours, or until chicken is very tender.

Remove the chicken from the slow cooker and transfer to a cutting board to shred. Return the shredded chicken to the slow cooker along with the remaining taco seasoning mix and stir to combine. Cover and continue to cook on the low setting for an additional 30 minutes.