With the summer in full swing you might have enjoyed a hamburger or hot dog by now. And with those summer BBQ staples comes one dilemma I’m sure most have you have faced… left-over hamburger and hot dog buns. If you haven’t, you’re lucky. I was facing this very dilemma after my July 4th BBQ. I bought extra buns just in case, and while most of it went I still had some left that I just wouldn’t be able to finish on my own. So, I started thinking what I could make with them. A Bourbon Bread Pudding sounded like a good option.

To start, I soaked a cup of raisins in a quarter cup of Jim Beam Bourbon. I let them sit for about 2 hours until most of the bourbon had been soaked up by the raisins. You can actually do this step a day or two before you plan on making your bread pudding.

Since the hot dog buns were still fresh, I had to make them “stale” so that they wouldn’t fall apart too much when I added the liquid. To do so I toasted the bread. I began by slicing 8 hot dogs buns into cubes. Without splitting the buns in half, I sliced them in half lengthwise and then sliced them again into cubes. I placed them on a baking sheet and toasted them a 350 F preheated oven for about 15 minutes. Until the cubes were toasted, but not burnt. 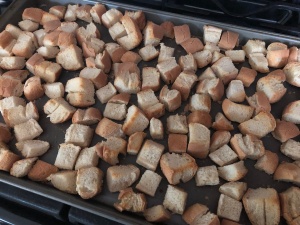 Once the bread had cooled I transferred it to a large bowl and added in a quart of whole milk. Using my hands I pressed the bread into the milk until all of it was absorbed.

In a medium bowl I whisked together eggs, sugar, vanilla extract, allspice and cinnamon. 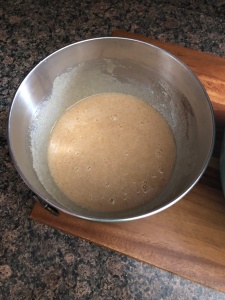 Once the egg mixture was well combined I poured it over the bread mixture and then gently folded everything together. Finally I folded in the bourbon soaked raisins, adding in any bourbon that hadn’t been soaked up by the raisins as well.

I poured the mixture into 9×13 baking dish that I brushed with melted butter and baked it in a 350 F preheated oven for about 45-50 minutes. 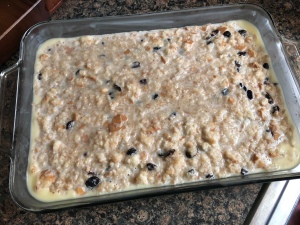 When done, the edges of the bread pudding were brown and pulling away from the baking dish. And while the center was still a little wet, I knew that it would firm up as it cooled.

And while it cooled I made a bourbon sauce to drizzle over the bread pudding. In a medium saucepan I melted a stick of unsalted butter over low heat. I then added in sugar and an egg and whisked everything to combine. As the mixture continued to cook over low heat I constantly stirred it until it began to thicken. At this point I removed it from the heat and whisked in bourbon.

The sauce was the perfect topping to a slice of the bread pudding, all that was missing was a scoop of vanilla ice cream! 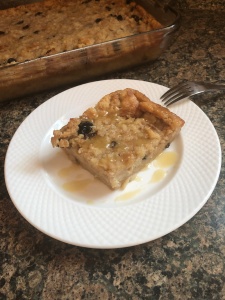 In a small bowl combine the raisins and 1/4 cup of bourbon whiskey, cover and let sit until the raisins soak up most of the liquid. At least one to two hours.

Place the cubes of bread on a baking sheet and toast in the oven until crispy, about 12 – 15 minutes. If you find the bread still soft on the bottom, flip and bake for a few more minutes.

Remove the bread from the oven and let cool for a few minutes before transferring to a large bowl. Add the milk and using your hands press the bread into the milk until it’s absorbed.

In a medium bowl whisk the eggs together and then whisk in the sugar, vanilla extract, allspice and cinnamon. Pour this over the bread mixture.

Fold the two mixtures together until well incorporated and then gently stir in the bourbon soaked raisins, adding in any bourbon that wasn’t soaked up by the raisins.

Pour the melted butter into the bottom of 9×13 baking dish and using a pastry brush (or napkin) coat the bottom and sides of the dish with the butter. Pour the bread pudding mixture into the dish and bake in the oven for 40 – 50 minutes.

The bread pudding is ready when the edges begin to brown and pull away from the sides of the baking dish.

Remove from the oven and let cool.

While the bread pudding is cooling you can make the bourbon sauce.

In a medium saucepan melt the butter over low heat. Add the sugar and egg and whisk to blend it. Continue cooking the mixture over low heat, stirring constantly until the mixture has thickened. It should be able to coat the back of a spoon. Remove the mixture from the heat and whisk in the bourbon.

Serve the bread pudding with the bourbon sauce drizzled over it.