My apologies to anyone who is not a fan of pumpkin as this is my second pumpkin post this week and third in a month! For those of you who can’t get enough of pumpkin read on and for those of who you could do without another pumpkin recipe just scroll down and look at the yummy pictures. Oh, as a warning there will be at least one more pumpkin recipe coming soon.

For most pumpkin recipes a full can of pure pumpkin is not necessary so you’re left with a cup or two remaining. What do you do? You can put it in a Tupperware and hope you remember to use it before it goes rancid. Or, the best solution obviously would be to use it up right away. Sometimes that’s easier said than done depending on what recipes you have on hand and/or what you’re in the mood for. But, if you don’t mind enjoying some pumpkin in the morning and then again at dinnertime I have just the recipes to use up that one can of pumpkin in a day! Pumpkin French Toast and Pumpkin Risotto. Both of which require a bit of time and the risotto some patience so they are best suited for those times you have extra time and patience on your hands.

I began the day by making the Pumpkin French Toast. I came across this recipe on People magazine’s website and it comes from fellow blogger Sally McKenney Quinn of Sally’s Baking Addiction. I began by whisking together milk and eggs in a bowl and then whisked in the pumpkin, maple syrup, vanilla extract, cinnamon and pumpkin pie spice. Once it was well combined I transferred the mixture to a shallow bowl. After slicing day old challah bread into fairly thick slices I dipped them into the mixture, a few seconds on each side, and then cooked them on a skillet that I heated on medium heat and greased with butter. I enjoyed them topped with butter and more maple syrup and it was an absolutely delicious breakfast. 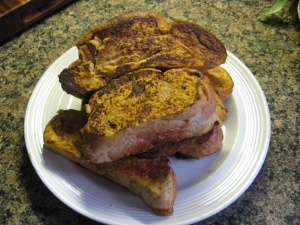 Later in the day I used up the rest of the pumpkin by making Pumpkin Risotto. I came across this recipe on People as well, but, in their magazine as opposed to their website. I began by doing a little prep work… I measured out 1 cup of Arborio rice & pumpkin, chopped a small yellow onion, minced 1 garlic clove and chopped fresh sage.

After bringing 5 cups of vegetable broth to a gentle boil in a medium saucepan I let it simmer while I sautéed the onions in olive oil in a large skillet. Once the onions were soft I added in the garlic and cooked it for about a minute and then added in the rice and 1 cup of the warmed broth. I reduced the heat of the skillet from medium to medium low so the mixture could simmer while I stirred it often. Once the broth had been mostly absorbed I added in another cup of broth and continued stirring until once again it was almost absorbed. I continued doing this until I finished the broth and the rice was tender. I will say that even without the pumpkin the risotto tasted delicious at this point, so if you’re not really a fan of pumpkin don’t add it and you’ll have a delicious basic risotto. Once the rice was tender I stirred in the pumpkin, salt and nutmeg. I also seasoned it with pepper and continued stirring it until it was hot and then finally topped it with the chopped sage.

Heat a skillet over medium heat.

In a large bowl whisk together the eggs and milk. Once combined, add in the pumpkin, maple syrup, vanilla extract, ground cinnamon and pumpkin spice. Continue mixing until well combined and then transfer to a shallow dish.

Take one slice of the challah bread and dip it into the mixture and let sit for a few seconds, flip the bread and let soak for a few more seconds. Transfer to the prepared skillet and let cook until golden brown on each side. Repeat with each slice.

Recipe can be found here.

In a medium saucepan over medium-low heat bring the broth to a gentle boil and let simmer while preparing the recipe.

Heat a large skillet over medium-high heat and add olive oil. Reduce the heat to medium and sauté onions for about 3 to 4 minutes, until soft. Add the garlic and cook for addition minute, until fragrant. Stir in the rice and 1 cup of the heated broth and reduce the heat so the mixture simmers. Stir often, until most of the liquid has been absorbed. Repeat with an additional cup of broth and continue stirring. Repeat this step until the rice is tender, about 20-30 minutes.

Stir in the pumpkin, salt and nutmeg. Season with the pepper and stir the risotto until hot. Top with the sage and serve.