There’s nothing like baked treats made from scratch, but taking a shortcut can create something just as delicious – as was the case when I recently made Strawberry Shortcake Cupcakes and Cinnamon Roll Cupcakes. The shortcut for these cupcakes came in the form of using packaged cupcake mix. I came across these Betty Crocker Cupcake mixes that are perfectly proportioned for 12 cupcakes.

I got the idea for the Cinnamon Roll Cupcakes from a fellow bloggers website – Eat My Shortbread – and while she made hers from scratch I mixed in about 1/2 cup of sour cream to the batter of the yellow cupcake mix. Once I had my batter divided up among my twelve-cup muffin tin I swirled in a mixture of  cinnamon, brown sugar and melted butter. After baking for 15 minutes this was the final product. 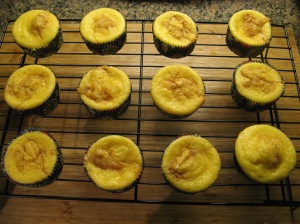 For the frosting, I made a Cream Cheese frosting and piped in on to each of the cupcakes and then sprinkled them with cinnamon.

I usually make Strawberry Shortcake as a whole cake but decided to try out my method of making the cake on a smaller scale… i.e. cupcakes. To start I followed the directions to make the cupcakes on the white cupcake package. I then used a cupcake corer to make a hole in each of the cupcakes to fill them. 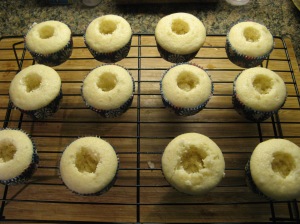 For the filling I made fresh whipped cream and folded in chopped strawberries. 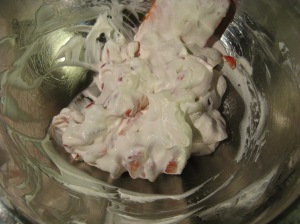 I then filled each of the cupcakes. I actually made too much of the filling but it definitely didn’t go to waste… It was a nice afternoon snack. 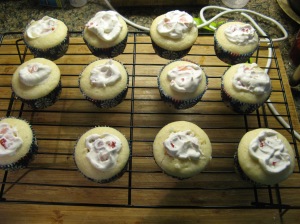 For the frosting I whipped up another batch of whipped cream and piped it on to each of the cupcakes.

Overall the cupcakes were a hit, especially the Cinnamon Roll ones.

In a medium bowl cream together the cream cheese and butter until creamy. Mix in the vanilla, then gradually stir in the confectioners’ sugar.

Chill a large bowl (stainless steel or glass) and a whisk or mixer beaters for 30 minutes. Combine the heavy cream and sugar in the bowl and whisk or beat at medium speed until cream holds soft peaks. Yields approximately 2 cups.